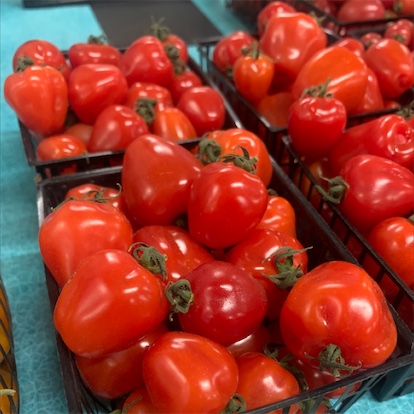 Missouri Pippin apples are small to medium-sized fruits, averaging 6 to 7 centimeters in diameter, and have a round to conical shape, sometimes bearing lopsided shoulders. The skin is smooth, thick, and chewy with a yellow-green base, covered in bright blush and dark red striping. The skin is also coated in a layer of wax, giving the surface a glossy appearance. Underneath the skin, the white flesh is fine-grained, semi-juicy, and tender with a crisp but soft consistency without a substantial crunch. The flesh will also begin to yellow once exposed to air and encases a central core filled with small, black-brown seeds. Missouri Pippin apples have mild acidity, creating a sweet, subtly tangy flavor that mellows quickly and does not linger on the palate.

Missouri Pippin apples are a very late season antique variety of Malus domestica from the 19th century. Much more common in the past as a commercial variety, they are relatively rare today. Missouri Pippins are of unknown parentage, since the first tree was grown from a seed.

Apples have several important nutrients such as dietary fiber, which aids in digestion, and Vitamin C, important for immune system functioning. Apples also contain small amounts of boron, Vitamin B, and quercetin, in addition to several antioxidants and phytochemicals.

Missouri Pippins are primarily used for fresh eating, rather than cooking or baking. Pair with fresh cheeses such as cheddar or goat cheese or slice in fresh salads. Missouri Pippins are good keepers, and can be stored for 2 or 3 months in the refrigerator or other cool, dry area.

New varieties of apples are developed or discovered in a variety of ways. The word “pippin” means an apple grown from seed, as the Missouri Pippin was. Apple seeds do not grow fruits that are the same as the apple from which it came. Farmers who develop apples from seeds watch closely to see if the resulting tree and fruit is worth keeping and/or bringing to market, since they have no way of knowing what the seed will grow beforehand.

Brinkley Hornsby, of Johnson County, Missouri, grew the first Missouri Pippin in 1854. He had brought many apple seeds with him as he moved west and settled in the area in 1839. He named the promising apple his “dollars and cents” variety, and it was soon sold in St. Louis under the name Missouri Keeper. The Missouri Pippin was a much more common apple in the 19th century, when it was grown commercially. Missouri Pippins were used by orchardists to start making money off of their orchards soon after planting. Most apple trees take many years to start producing fruit. Missouri Pippins take only two or three years, and so were a valuable addition to new orchards, while farmers waited for the rest of their trees to start producing. It is well suited to Midwestern and the piedmont region of the south.

Recipes that include Missouri Pippin Apple. One