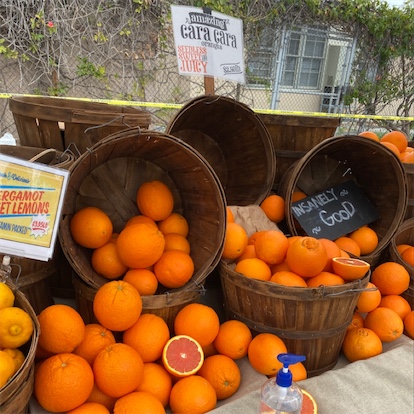 Agitake mushrooms are medium in size and have a cylindrical stem that connects to a flattened circular cap. The thick, broad cap is light brown, smooth, and spongy with long tan gills on its underside. Attached to the cap is a bright white truncated stem that is semi-firm and dense. There is also a variety of Agitake mushroom that has a white cap and white stem. When cooked, Agitake mushrooms are meaty, crisp, and velvety with a buttery, umami flavor.

Agitake mushrooms are available year-round but on a very limited basis.

Agitake mushrooms, botanically classified as Pleurotus eryngii var. ferulae, are a variant species of a king oyster mushroom that are members of the Pleurotaceae family. Agitake mushrooms grow from bacteria produced in the ferula asafoetida, which is a medicinal plant used for centuries to help treat ailments in Europe and Asia. Agitake mushrooms are somewhat rare and are favored for their smooth texture and umami flavor.

Agitake mushrooms are best suited for cooked applications such as steaming, grilling, sautéing and frying. Their meaty texture allows them to act as a meat substitute in vegetarian dishes and can be chopped and mixed into soups, sliced into stir-fries, or sautéed and added into main vegetable dishes. Agitake mushrooms can also be battered and fried to create a crispy, velvety bite. Agitake mushrooms pair well with seafood, poultry, legumes, grains, Asian greens, ginger, chiles, herbs, peppercorn, soy, garlic, vinegar, and dry white wines. They will keep up to one week when stored in a paper bag in the refrigerator.

The Agitake mushrooms pictured above were found at the Tsukiji Market near Chuo, in Tokyo, Japan. Agitake mushrooms are commonly used in Takikomi gohan, which is a Japanese rice dish that incorporates meat or seafood, vegetables, and mushrooms. In Japan, they are also used in Tsukudani, which is the process of preserving foods in a mixture of boiling sugar and soy sauce and serving with white sesame seeds and rice.

Agitake mushrooms made their first appearance in the Japanese market in 2008 via Yamanaka, a professor and mushroom grower at Kyoto University. Yamanaka chose a variety from China that is only cultivated in a controlled environment and made use of enoki cultivation facilities to produce the mushroom. The production of Agitake mushrooms has been limited in Japan since they are difficult to produce and are harvested mainly in the Nagano and Iwate prefecture. Today Agitake mushrooms can be found at local markets and also grow wild in grassland areas of Southern Europe, Czechoslovakia, Hungary, France, North Africa, Central Asia, South Russia, and North America.

Recipes that include Agitake Mushrooms. One