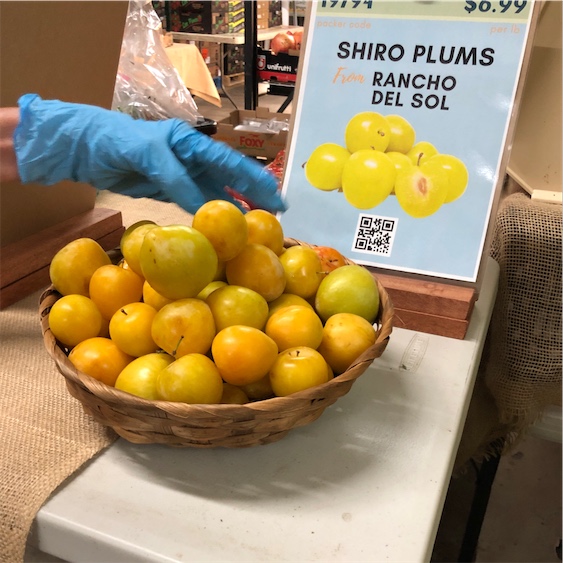 Tricolor sage is a compact, shrubby perennial with maroon colored upright stems and fuzzy, textured leaves. The oblong leaves are a colorful mix of grey-green and white when mature, new leaves are a deep purple color. Depending on the amount of sun the plant receives, leaves can have either pink or white edges. Tricolor sage leaves, like garden sage, are strongly aromatic and taste of rosemary and pine with hints of citrus. Fresh leaves are more intensely flavored than dried leaves. In the summer, Tricolor sage produces two-lipped, lavender-blue flowers.

Tricolor sage is a variation of common sage, known scientifically as Salvia officinalis. It is grown for both its ornamental and culinary qualities. Its leaves are laden with rich aromatic oils which is indicative of the Lamiaceae (mint) family. Sage is derived from the Latin 'salvare' meaning ‘to save’ which dates back to the Middle Ages and is a reference to the medicinal uses for sage.

Like the common garden sage, Tricolor sage contains high amounts of vitamins A and C. The herb also contains volatile oils, responsible for its aroma and flavor. Sage contains the compounds camphor, pinene, thujone, and others, as well as estrogenic substances and flavonoids. These substances and compounds are beneficial to the digestive system, they have an astringent quality and anti-septic properties.

Tricolor sage can be used in any recipes calling for fresh or dried garden sage, and especially when a little color is preferred. The herb is not typically used in raw applications, unless it is used as a garnish. The colorful herb is often used by restaurant chefs and food magazines as a garnish for poultry dishes or tomato soup. Pan fried Tricolor sage can be used as a garnish as well. Sage pairs well with sausage, pork and poultry, soups and stews. The ancient herb adds flavor to stocks and stuffings. Chop Tricolor sage and add to butters or spreads to impart a savory flavor. Air dry Tricolor sage by laying leaves on screens or upside-down on hanging racks. Fresh Tricolor sage leaves can be stored in a plastic bag in the refrigerator for up to one week.

Sage was first cultivated by Charlemagne, a European emperor in the 9th century. The herb was cultivated for both culinary and medicinal purposes. Sage was included in a vinegar blend used against the plague, called ‘Four Thieves’. The herb had numerous uses for Native Americans, who used it as a cure-all and mixed it with animal fat to create a salve.

Sage is native to the Mediterranean region, particularly the mountainous slopes. Tricolor sage has a long history of medicinal use. Ancient Egyptians and Greeks used sage for a wide variety of medicinal purposes, from staunching a bleeding wound to tonics used for hoarseness, inflammation and cough. Sage made its way to North America with colonists, and over the last three hundred years it has become naturalized in the wild and cultivated for both ornamental and culinary use. Tricolor sage grows well in most areas, and can weather most winters outdoors. It is hardy to USDA Zones 5-11.