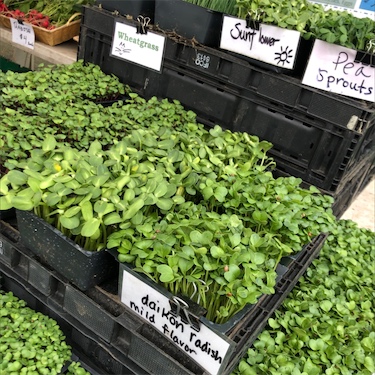 The Hyakume persimmon is known as the sweetest persimmons of them all. The Hyakume is short and stout, resembling an oval tomato shape with an indented leaf on its stem end. When ripe, its skin is pumpkin toned with a flesh deepening with speckles of chocolate and cinnamon. The fruit possesses layers of flavors reminiscent of baking spices, dried apples and brown sugar. Its texture varies from crisp and succulent when young to soft and custard-like as it overly matures.

The Hyakume persimmon is available from late fall to early winter.

The Hyakume persimmon is the fruit of a deciduous and evergreen tree of the Ebenaceae (Ebony) genus. Hyakume persimmon's given name is an old Japanese unit of weight equivalent to 5/6 of a pound. Its Western nickname is Brown Sugar, a reflection of its sweetness and coloring when ripe. There are limited genetic studies of Hyakume persimmons and persimmons in general, thus there is no taxanomic chart of persimmons, which ultimately limits any guarantee of what persimmon you are getting. Shape, texture and flavor play the most important role in choosing Hyakume persimmons, because if they are truly the sweetest persimmon, only an exact specimen would prove that true. In order for a Hyakume persimmon to display its sweet flavor it must be pollinated, and therefore contain seeds. If the fruit does not contain seeds there will be higher levels of tannins and bitter flavor.

The Hyakume persimmon is an ancient Japanese variety that still grows in Japan and whose legendary flavor would bring it to California in the early 20th century with Japanese immigrants. Those Japanese immigrants and American consumers benefited from the Transatlantic Railroad and the Gold Rush, two elements that would enhance global distribution and the evolution of agricultural waterways. The Gold Rush forced the innovation of canals to run water throughout one of the major tree fruit growing regions in California, Plaster County. Though the Hyakume persimmon was never considered a commercial cash crop, the persimmon trees flourished in Plaster County in a region known as Penryn, home to generations of Japanese immigrants, who simply grew what they were familiar with.

Recipes that include Hyakume Persimmons. One