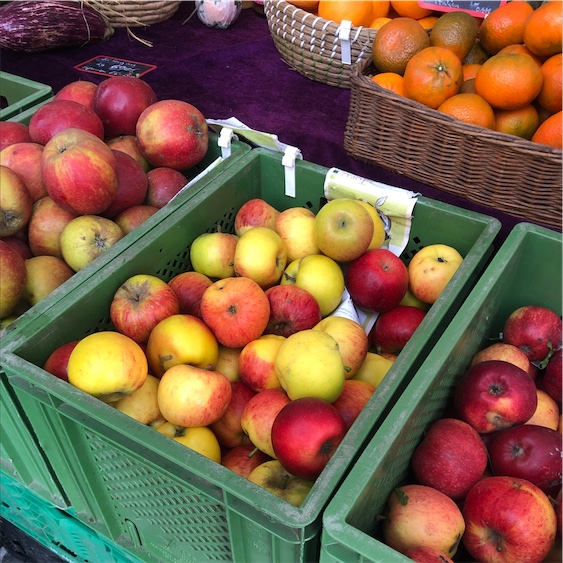 Lychees are small fruits, averaging 2 to 5 centimeters in diameter, and have an oval, round, to heart-shaped appearance. The fruit’s skin is leathery, rough, and thin, covered in scaly patches and fine hairs, giving the surface a textured, bumpy feel. The skin varies in coloring, depending on the variety, and is found in pink, bright red, pink-red, and rosy shades, sometimes tinged with green. Despite its tough appearance, Lychee skin can be easily punctured and peeled, revealing glistening translucent to opaque white flesh. The flesh is often covered in juice and has a firm but soft crunch, similar in mouthfeel to a chewy, crisp grape. The flesh also encases an inedible, dark brown oval seed that varies in size from thick to thin. Lychees are aromatic and release a tropical scent reminiscent of sweet fruits and roses. When ripe, the fruits should have a bright skin coloring and showcase a taut but elastic, bouncy nature when gently pressed. The flesh can be consumed raw, discarding the skin and seed, and has a sweet and subtly acidic flavor with musky, floral, citrus, and rose water undertones combined with nuances of watermelon, strawberry, and melon.

Lychees are available in the late spring through mid-summer.

Lychees, botanically classified as Litchi chinensis, are tropical fruits belonging to the Sapindaceae or Soapberry family, which includes other fruits like rambutans and longans. The fleshy fruits grow in hanging bunches on evergreen trees that can reach anywhere from 9 to 30 meters in height, depending on the variety, and each bunch can contain anywhere from 2 to 20 fruits. Lychees are native to Asia and have been growing wild since ancient times. There are many different varieties of Lychees cultivated using natural breeding practices throughout history, and some of the prominent commercial cultivars include Hak Ip, Kaimana, No Mai Tsze, Sweet Heart, Sanyuehong, Shahi, Brewster, Mauritius, Emperor, and Groff. Lychees are also known as Litchi, Lichee, Lychee Nut, and Alligator Strawberry for their red, scaly skin, and the fruits are primarily consumed raw as a fresh delicacy. In the modern-day, Lychees grow in tropical to subtropical climates worldwide and are marketed as an exotic fruit, sold fresh, canned, or dried.

Lychees are an excellent source of vitamin C to strengthen the immune system, boost collagen production, and reduce inflammation. The fruits also provide potassium to balance fluid levels within the body, copper to develop connective tissues, fiber to regulate the digestive tracts, and other nutrients, including B vitamins, rutin, and epicatechin. In Traditional Chinese Medicine, Lychees are viewed as a digestive stimulant and are believed to help remove toxins from the body. The fruits are also consumed to reduce symptoms associated with colds.

Lychees have a tropical, floral, and fruity flavor well suited for fresh and cooked preparations. The fruits are traditionally consumed straight, out of hand, discarding the skin and seed, and are enjoyed on their own or mixed into green salads and fruit bowls. Lychees are also popularly halved and served over desserts, placed over ice cream, or topped over shaved ice. In Hawaii, Lychees are stuffed with cream cheese and topped with macadamia nuts. The fruit’s floral and sweet flavor is a favorite ingredient in desserts such as puddings, custards, crumbles, cupcakes, and cakes. The fruits can also be served in a coconut milk sauce with bananas and brown sugar as a sweet treat. Beyond fresh preparations, Lychees can be simmered into sauces and spooned over seafood dishes, cooked into jams, or infused into syrups. Try incorporating Lychees into tea, cocktails, and other sparkling beverages as an exotic flavor. In addition to fresh and cooked dishes, the fruits are also canned in syrup for extended use year-round. Lychees pair well with fruits such as coconut, pineapples, strawberries, bananas, blueberries, grapefruit, and passion fruit, nuts including cashews, almonds, and pistachios, sesame, honey, elderflower, tapioca, and soft mild cheeses. Whole, unwashed Lychees have a short shelf life and should be immediately consumed for the best quality and flavor. The fruits can also be wrapped in a paper towel and stored in a perforated plastic bag in the refrigerator for up to one week. For extended storage, the fruits can be frozen whole in a plastic bag.

In China, Lychees are often referred to as the “Fruit of Romance.” This passionate moniker was given to the fruit after its fame during the Tang Dynasty, 618 to 906 CE. During this dynasty, Lychees were rare in northern China, especially in Xi’an, the city where the emperor resided and were only found growing in southern China, mainly in the Guangdong Province. One day Emperor Tang Xuanzong discovered that his favorite concubine Yang Yuhuan loved Lychees. Yang Yuhuan is historically known as one of the four beauties of Ancient China, and Emperor Tang Xuanzong was smitten with the concubine, confessing his love for her during moonlit nights, giving her extravagant gifts, and allowing her to live luxuriously. To make Yang Yuhuan smile, he established a courier service to transport the Lychees from Guangdong in southern China to the palace. Lychees are notorious for having a short shelf life, requiring the courier team to ride on horseback nonstop, switching out horses and riders to transport the fruits in the quickest time. Emperor Tang Xuanzong constructed 1,639 stations throughout China for deliveries, and each rider could travel up to 225 kilometers per day. This infrastructure provided Chinese cities with efficient means of communication, but the use of personnel and horses to transport Lychees was met with criticism. Legend has it that some riders would have to transport branches or full Lychee trees along the journey, harvesting the fruits when they were close to being delivered to keep them fresh. When the Lychees arrived, it was reported that the fruits made Yang Yuhuan smile, an expression that made the entire journey worthwhile to the emperor. This tale of extravagance has led Lychees to develop a reputation as a passionate delicacy. Guangdong Province also earned the nickname the “Kingdom of Lychee.” Yang Yuhuan’s love for the fruit lives on into the present day, as her story has inspired a Lychee variety to be named after her, known as Fei Zi Xiao, translating to mean “smiling concubine.”

Lychees are ancient fruits that have been growing wild in Southern China and Southeast Asia for thousands of years. Experts believe the fruits were first discovered in the Yunnan province of China, later being carried along the Xijiang River into the Pearl River Delta to Guangdong and Fujian provinces and Hainan Island. Lychee trees thrive in tropical climates, and some experts believe there may have been wild trees also in Vietnam. Over time, Lychee trees naturalized throughout Southeast Asia, especially in Malaysia, Cambodia, Thailand, India, and Taiwan. During the Han Dynasty in China, Lychees were often given to the Imperial Court as gifts, and this tradition continued through several dynasties. Lychees were also introduced to the West Indies in 1775 and were grown in greenhouses in England and France in the early 1800s. In 1873, Lychees were planted in Hawaii and were eventually brought to Florida in 1883 as an exotic fruit species. Today Lychees are commercially grown in China, India, Taiwan, and Vietnam. China is the largest producer, growing the tropical fruits in Hainan, Yunnan, Guangdong, Guangxi, Sichuan, and Taiwan. In Guangdong, it is rumored there is a Lychee tree over 1,000 years old that still produces fruits. Outside of Asia, Lychees are also grown in tropical regions worldwide, including Hawaii, Florida, Texas, and California of the United States, Australia, South Africa, Madagascar, the Caribbean, and Central and South America. When in season, Lychees are primarily localized to markets in their growing region as the fruits have a short shelf life.


Recipes that include Lychees. One


People have shared Lychees using the Specialty Produce app for iPhone and Android.