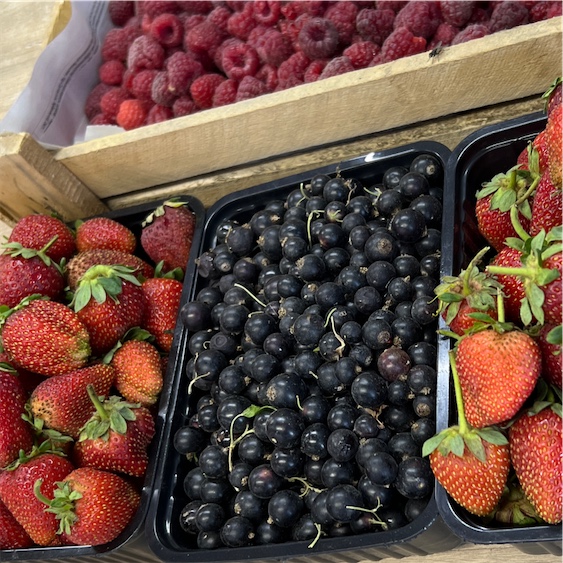 Sausalito Watercress is small to medium in size with many leaflets that grow on thin stems connected to a cluster of roots. The green leaves are ovate to round in shape with scalloped edges, and each stem grows 20-25 centimeters in length and produces approximately 3-9 leaflets. The dark green stems are hollow, crisp, and have the ability to gradually creep across water and land. In addition to the leaves, Sausalito Watercress will also produce small clusters of fragrant white flowers and small pods with edible seeds as it matures. Sausalito Watercress is crunchy and tender, has a spicy scent, and has a slightly bitter, peppery, and tangy flavor when fresh. When cooked, the peppery, pungent flavor will slightly diminish.

Sausalito Watercress is available year-round, with a peak season in the spring through early summer.

Sausalito watercress, botanically classified as Nasturtium officinale, is an aquatic to semi-aquatic plant that is a member of the Brassicaceae family along with cabbage, kale, and mustard greens. Also known as Sausalito Springs Watercress, Sausalito Watercress is a cool-season herb that is used primarily as lettuce and is given its name from the region that it is organically grown in, located in Northern California. Valued for its sharp, peppery flavor, Sausalito Watercress is fast-growing, self-sufficient, and is extremely versatile, used in both fresh and cooked applications.

Sausalito Watercress is best suited for both raw and cooked applications such as lightly sautéing, wilting, and boiling. The leaves and stems can be blended and used in meatloaf, minced into filling for pot stickers or tortellini, cooked into a frittata, used fresh as a garnish, torn and mixed into salads, ground into pesto, or blended into juices and smoothies. They can also be layered in wraps and sandwiches, tossed into soup, sprinkled on top of a pizza, melted into grilled cheese, served over mashed potatoes, or used to make tarts and ice cream. Sausalito Watercress pairs well with beet, mango, apple, figs, avocado, blood orange vinaigrette, tomatoes, cucumber, fennel, mushrooms, butternut squash, pickled onion, rice, blue cheese, goat cheese, potatoes, sweet potatoes, eggs, roasted meats, sausage, herring, salmon, clams, tofu, yogurt, and pine nuts. The leaves and stems are highly perishable and will only keep up to four days when stored in a perforated bag in the refrigerator. The greens can also be stored upright in a glass of water and covered with a bag in the refrigerator.

In England, there is a festival known as the Alresford Watercress Festival that is hosted each May to celebrate the peppery green. Over eighty booths filled with art, crafts, and unique food and drinks such as Watercress beer and Watercress sorbet in paesan cones line the town’s streets. There is even a Watercress eating competition that is in the Guinness Book of World Records with the fastest time clocking in at thirty-two seconds. The purpose of the annual festival is to showcase the green and to bring awareness to its versatility of being more than just a garnish.

Watercress is native to Europe and Asia, with documentation of its existence dating back to over three-thousand years ago to Phoenicia, Ancient Greece, and Portugal. Cultivated from a wild plant in Europe, Watercress was introduced to America in the 18th century and became commercially popular in the late 20th century. Today Sausalito Watercress is grown in Northern California and can be found at farmers markets and specialty grocers across the United States.

Recipes that include Sausalito Watercress. One