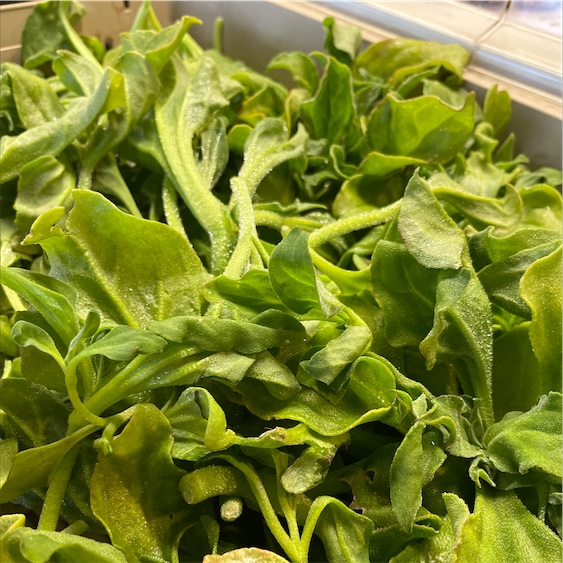 Golden Swiss chard is distinguished by its vivid sun-colored petioles that bolt upward into crinkly wavy and savoyed emerald green leaves. Its leaves have a chewy and juicy texture, as they retains high levels of water. Their flavor is reflective of their genus, slightly beet-like, earthy and mild. The stems are fibrous and often bitter, thus best suited to cooking.

Golden Swiss chard is a hardy biennial of the genus Beta vulgaris. Plant pigments are responsible for Golden Swiss chard's vibrant colors, those pigments are essentially survival tactics and the visual cue of photosynthesis at work. The vivid pigments attract insects and bees to encourage pollination. Golden Swiss chard plant leaves contain varying amounts of chlorophyll, carotene, xanthophylls and anthocyanin. The green coloring is representative of high levels of chlorophyll. The stems support the leaves to absorb energy by gathering wavelengths of light not readily absorbed by chlorophyll. Their yellow coloring is due to the content of the carotenoid, lutein, which is synthesized only by plants, specifically leafy vegetables.

Golden Swiss chard is known to be a nutritional powerhouse vegetable packed with vitamins, nutrients and health benefits. Golden Swiss chard contains high levels of vitamins C, K, E, beta-carotene and the minerals manganese and zinc. As noted, it also contains lutein, which is a natural occurring antioxidant. Lutein works as an antioxidant to reduce the damage done by free radicals. Scientific studies have shown lutein can decrease your risk of cardiovascular disease and increase heart health. Lutein can also increase sharp central vision. The only definitive side effect of excess lutein consumption is bronzing of the skin.

Golden Swiss chard can be used similarly to other leafy greens and chard varieties and may be eaten raw when young, but larger leaves are best cooked. They can be sautéed, blanched, stewed, braised, baked, and even grilled. Use raw leaves to add an earthy saltiness and a bright color to salad mixes. Slow cook entire stalks similarly to collards, though some of their golden color may lessen and become dull, and compliment with smoked meats and white beans. Wilt the shredded leaves into pastas or atop pizzas and flatbreads. The golden stalks are as equally edible as the leaves, and may be used in dishes for added texture. Complimentary flavors include citrus, tomatoes, garlic, shallots, chickpeas, white beans, potatoes, aged and melting cheeses, cream, mushrooms, bacon, sausage, ham, chili flakes, fennel and herbs such as basil, tarragon and chervil

The word "Swiss" was used to distinguish chard from cardoon, or artichoke (Cynara cardunculus) in French seed catalogs. Apparently the seeds of both plants were sold under the same names, and the “Swiss” moniker stuck, becoming a universal label we know today.

As its genus, Beta vulgaris, suggests, chard is, in fact, a beet that has been chosen for leaf production at the expense of root formation. All chard varieties are descendants of the sea beet (B. maritima), a wild seashore plant found growing along the Mediterranean and Atlantic coasts of Europe and North Africa. Golden Swiss chard is French in origin and it is one of the rarest chards on the market today. One of the most heat-tolerant greens, Golden Swiss chard is best grown for harvest in summer and can be continually harvested to the first frost of the season. It is often grown as an ornamental green in edible gardens.