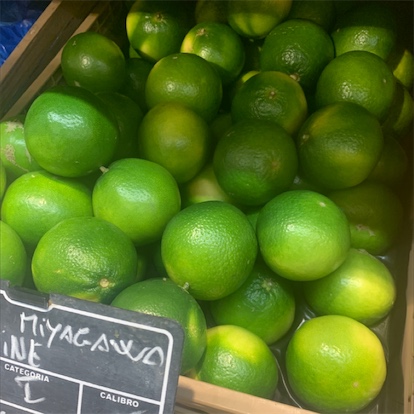 Buddha’s Hand citron widely varies in size, shape, and appearance, depending on growing conditions and specific type. The fruit begins small with an oval to oblong shape and is a purple-brown hue. As it matures, the fruit transitions to golden yellow, and the non-stem end separates and extends into elongated, finger-like segments. The fingers can be broadly spread in all directions, or they can be tightly layered and closed. The rind of the citron is textured, bumpy, and covered in small oil glands that release an aromatic scent reminiscent of lemon and lavender. The rind also has a bitter-sweet, citrus-forward flavor. Underneath the rind, the flesh is generally void of juice, seeds, and pulp and only contains a thick and spongy, white pith that bears sweet flavor. Buddha’s Hand citron has a bitter-sweet, bright and floral flavor that is primarily used as a zest for flavoring sweet and savory applications.

Buddha’s Hand citron, botanically classified as Citrus medica var. sarcodactylis, is an unusually shaped variety belonging to the Rutaceae family. The ancient citrus is native to Asia, where it has been cultivated for thousands of years for its perfum fragrance. There are over twelve subvarieties of Buddha’s Hand grown in Asia with varying shapes, sizes, and open or closed fingers, and the citron is also known as Fingered citron, Fo-Shou in China, and Bushukan in Japan. Outside of Asia, the variethas been established in the Mediterranean and parts of California and is grown on a limited scale as specialty citrus. Buddha’s Hand citron is not eaten straight, out-of-hand, but the aromatic rind and pith are used for infusing bright, citrus, and floral flavors into culinary dishes, baked goods, and beverages.

Buddha’s Hand citron is an excellent source of vitamin C to boost collagen production within the skin, reduce inflammation, and strengthen the immune system. The fruits also contain some fiber to regulate the digestive tract, calcium to promote bone growth, and vitamin E to protect the cells from free radical damage.

Buddha’s Hand citron contains no pulp or juice and is utilized for its fragrant, bitter-sweet rind and sweet pith. The rind is used as zest and can be mixed into salad dressings, pancake batter, baked goods, crème brulee, sprinkled over seafood, or iorporated into other savory dishes such as pasta. The flavor of Buddha’s Hand citron is widely versatile and can also be used in any recipe calling for lemon zest. In addition to zesting, the rind and pith can be sliced and used to infuse liquors, olive oils, sugars, and salts. The chopped pith pieces can also be cooked into marmalade and simple syrups, candied for a chewy sweet snack, or used to flavor tea and butter. In China, the pith is commonly cut into decorative shapes and is candied as an ed centerpiece for dinner parties. Buddha’s Hand citron pairs well with other citrus, arugula, cilantro, ginger, red onion, avocado, mango, prosciutto, and fish. Whole Buddha’s Hand will keep 1 to 2 weeks when stored in a cool and dry place away from direct sunlight. In the refrigerator, the fruit will last for 2 to 4 weeks.

Buddha’s Hand citron symbolizes longevity, happiness, and good fortune within many Asian cultures. In China and Japan, the fruits are placed on Buddhist altars as an offering, and it is said that Buddha prefers the fruits with closed fingers, as thmbolize praying hands. This auspicious symbol of praying hands also permeated into the household décor of Chinese dignitaries, and the shape of Buddha’s Hand citron was frequently carved into precious stones such as jade. In Japan, Buddha’s Hand citons are used as décor in the tokonoma, a recessed alcove featured in a house's reception room. The alcove is used as a space to display valuable items, and the unusually shaped fruits are favored for their fragrant aroma, used in place of a bouquet of owers. Buddha’s Hand citrons are also given as gifts to friends and family during new years and are believed to bring good fortune for the year to come. During the celebration, the fruits are used as table decorations, sliced and used as a fragrance in the laundry, or the oil from the rind is applied topically as a perfume.

Buddha’s Hand citron is native to Asia and has been cultivated since ancient times. There are multiple theories tracing the variety to either India or China, but the most accepted belief among experts is that the cultivar originated in India and was iroduced to China through Buddhist monks. Over time, Buddha’s Hand citron spread throughout Asia and was carried into Europe through trade and soldiers returning from expeditions into the Middle East and Asia. The fragrant fruits were planted throughouthe Mediterranean and were cultivated in Rome as early as 301 BCE. Buddha’s Hand citron was introduced from Japan to California in the late 19th century, but the variety was initially grown in private gardens as an exotic, novel fruit. In the late 20tcentury, the fruits were grown for small-scale commercial cultivation, and in the present day, there are approximately 25 acres of land dedicated to producing the fruits within California. Today Buddha’s Hand citron is found at local markets and specialty grocers throughout Asia, Europe, Australia, and the United States.

Recipes that include Buddha's Hand Citron. One