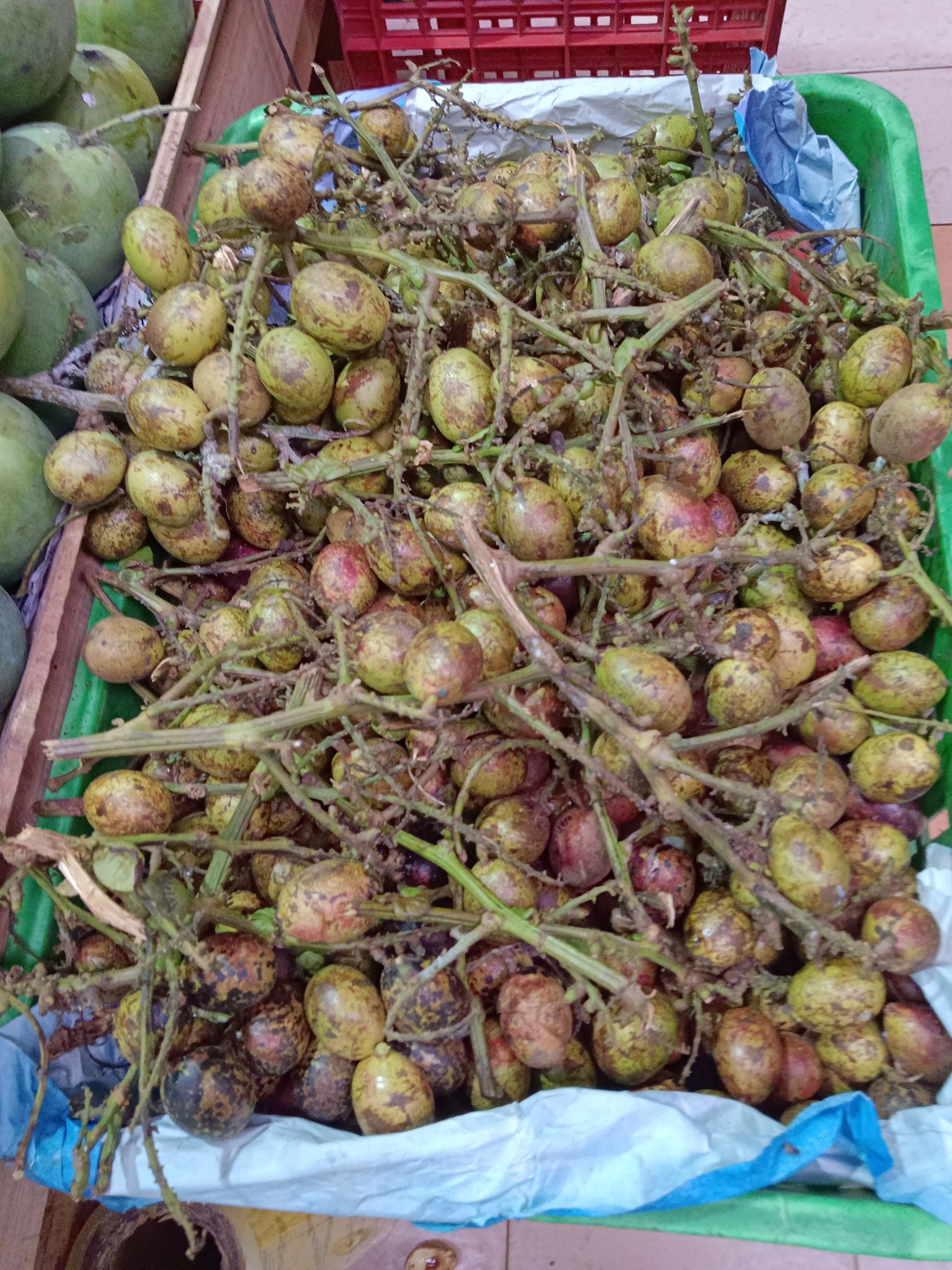 Pitogo bananas are tiny fruits, averaging 2 to 4 centimeters in diameter and 4 to 5 centimeters in length, and have an oval to tear-drop shape with a broad, curved non-stem end, similar in appearance to a fig. The peel is semi-thick, ripening from green to bright yellow with some brown discoloration, and is primarily smooth with a light waxy feel and a few rough patches. When ripe, the peel is easily removed, revealing seedless, pale yellow to ivory flesh with a sticky, dense consistency. Pitogo bananas are firm when young with a sweet-tart, slightly astringent flavor, and as the fruits mature, they develop a softer, creamier texture with a sweet, bright, and tangy, tropical taste.

Pitogo bananas, botanically a part of the Musa genus, are tiny, round, and short fruits belonging to the Musaceae family. The tropical variety is native to Southeast Asia, specifically the Philippines, and grows in medium, compact bunches surrounding the pseudostem of the banana plant. Bananas are considered to be one of the most important crops in the Philippines and are available year-round. Experts believe there are approximately ninety-one cultivars grown throughout the island country, and many of these varieties are not sold commercially and are grown for local consumption. Pitogo bananas are cultivated on a small scale for their novel size and are a dual-purpose variety, used in both fresh and cooked applications. In the Philippines, Pitogo bananas are also known as Platano Higo, meaning “fig plantain,” which is a descriptor used to highlight the banana’s similarity in shape to a curved fig. Pitogo bananas are also known by many other regional names throughout Southeast Asia, including Kluai Namawa Dam in Thailand, Chuoi Mo Giang in Vietnam, and Pisang Kates in Indonesia. Outside of its native region, Pitogo bananas are considered very rare and are a specialty variety cultivated through select farms and grown in home gardens of banana enthusiasts.

Pitogo bananas are a good source of vitamin B6, a nutrient that helps build neurotransmitters in the brain and contains vitamin C to strengthen the immune system and boost collagen production within the skin. The small fruits also provide some fiber to regulate digestion, potassium to balance fluid levels, and manganese to increase metabolism.

Pitogo bananas are a dual-purpose variety that can be consumed fresh or cooked. When raw, the fruits are primarily eaten straight, out-of-hand, and are favored for their bite-sized nature. Pitogo bananas can also be mixed into fruit salads, sliced as a topping over ice cream or oats, blended into smoothies, used to flavor ice cream, or dipped into chocolate and frozen as a sweet treat. In addition to fresh applications, Pitogo bananas can be caramelized in brown sugar and spices, battered and fried as a snack, or rolled into wrappers and deep-fried. The small bananas can also be sliced in half and dried for extended use. Once dried, the chewy banana strips will keep for over a year and are popularly incorporated into baked goods. Pitogo bananas pair well with vanilla, chocolate, brown sugar, powdered sugar, caramel, cinnamon, fruits such as jackfruit, strawberries, mangoes, and pineapples, raisins, and tea. Whole, unopened Pitogo bananas will ripen on the counter at room temperature. Once mature, the fruits should be consumed immediately for the best flavor.

In the Philippines, light snacks known as meriendas are traditionally served between meals to maintain blood sugar levels and ward off hunger. Meriendas were originally introduced to the Philippines through Spanish colonists, and in the modern-day, many Filipino families still adhere to the practice of snacking in between meals and use the time as a social gathering. Bananas, including Pitogos, are a popular ingredient in several dishes served during merienda. One dish, known as maruya, consists of sliced bananas dipped into a thick batter and deep-fried, creating a crisp, rich exterior with a soft, sweet interior. Bananas are also caramelized in sugar, known as banana cue, and are served on sticks, or they are traditionally wrapped in spring roll dough and fried, known as turon, and are served with fresh fruits, ice cream, or tea.

Pitogo bananas are believed to be native to the Philippines. The exact date of when the variety was discovered is unknown, but the fruits are quite popular in the present day throughout the Philippines for fresh eating and sweet applications. Pitogo bananas were later introduced to other tropical regions of Southeast Asia, including Indonesia, Malaysia, Vietnam, and Thailand, and were also planted in Hawaii, where the variety is being grown through specialty growers for small scale cultivation. Today Pitogo bananas are primarily found in home gardens and local markets in Southeast Asia. The variety is also found in tropical gardens grown as an exotic, rare cultivar in Hawaii and Florida. The Pitogo bananas featured in the photograph above were grown at Miami Fruit Farm in Miami, Florida.


Recipes that include Pitogo Bananas. One