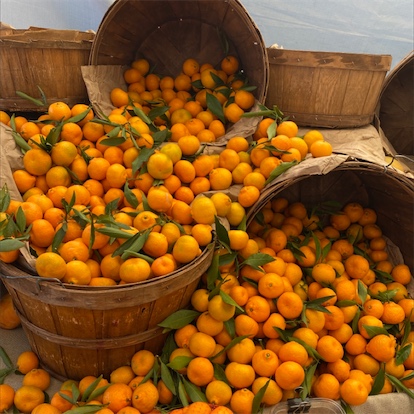 Bok Choy flowers develop in umbel-like clusters at the top of a long, fibrous stalk that emerges from the center of the leafy plant. The flowers are very small, typically 1 to 3 centimeters in diameter, and have an open appearance with 4 to 5 broad, flat, and curved petals. The petals display bright yellow hues and have a soft, velvety, crisp, and delicate consistency. Bok Choy flowers have a sweet, vegetal flavor reminiscent of broccoli combined with a dash of lingering black pepper and mustard-like nuances. It is important to note that Bok Choy flowers can be consumed when they are still mostly in their tight green buds and are just emerging. The flowers can also be eaten when they have fully opened and are used whole or separated into petals.

Bok Choy flowers are available in the fall.

Bok Choy flowers, botanically classified as Brassica rapa var. Chinensis, are the blooms of a non-heading cabbage belonging to the Brassicaceae family. The tiny blossoms are a rare, seasonal ingredient harvested from plants that are bolting. Bok Choy plants are a type of Chinese cabbage cultivated and prized for their crisp, spoon-shaped leaves. The plants are seldom allowed to develop flower stalks, as the leaves become tough and woody as the plants put their energy into growing the flowers. If Bok Choy plants bolt, it is typically due to high temperatures, drought, or the grower naturally letting the plant travel through its life cycle. As the plants develop their upright, central stalk, clusters of tiny green buds form, opening to reveal yellow flowers that eventually give way to seeds. Bok Choy flowers have the best flavor when harvested just before the buds completely open. The blooms have a sweet, vegetal, and subtly peppery taste and are used as an edible garnish to embellish fresh and cooked preparations.

Bok Choy flowers have not been studied for their nutritional properties. Like other edible flowers, the blooms may be a source of vitamin C to strengthen the immune system while reducing inflammation and beta-carotene, a compound converted into vitamin A in the body, which helps maintain healthy organ functioning. The flowers may also contain lower amounts of vitamins E and D and antioxidants to protect the body against the damage caused by free radicals.

Bok Choy flowers have a sweet, vegetal, and subtly peppery flavor suited for fresh and cooked preparations. The flowers are traditionally used when they are just emerging from the buds and are treated like an edible garnish, added at the end of the cooking process to prevent wilting. Bok Choy flowers can be sprinkled over salads, stirred into pasta, used as a garnish over appetizers, lightly pressed into soft cheeses, or folded into dips. The blossoms can also be floated over soups, incorporated into fresh spring rolls, mixed into stir-fries, noodle dishes, and rice, or placed on top of sushi and other seafood dishes. The flowers are sometimes baked into casseroles, quiches, and macaroni and cheese, or they can be used in various pickled preparations. Beyond using the flowers fresh, Bok Choy flowers can be dried and used as a seasoning, developing a slightly earthier flavor. Bok Choy flowers pair well with herbs such as parsley, basil, lemongrass, and mint, spices such as cumin, fennel, and coriander, and citrus, especially tangerine, grapefruit, and lime. The delicate blooms should be immediately consumed for the best quality and flavor and will only keep for 1 to 2 days when stored in a container in the refrigerator.

Bok choy in Cantonese is called “Baak Choi,” translating to mean “white vegetable,” and is a common ingredient used in everyday Chinese cuisine. In Mandarin, it is known as “Xiao Bai Cai” or “lesser white vegetable” or “cabbage” and “Qing Cai,” meaning “green vegetable.” Despite its widespread availability, Bok Choy is valued during the Chinese New Year, as leaves symbolize longevity. Whole Bok Choy leaves are incorporated into noodle and rice dishes, soups, and stir-fries. During Chinese New Year celebrations, Bok Choy is traditionally used in a dish of lion’s head meatballs. This dish is symbolic of family reunions, and the Bok Choy leaves are used as the lion's ”mane” as they wilt around the meatballs. Bok Choy is also served whole as a dish and is viewed as a blessing of long life for parents. Though Bok Choy flowers are not as widely used as the leaves, they can be incorporated into Bok Choy dishes for added flavor and aesthetic. Their yellow coloring is also a favored color in Chinese culture, often representing prosperity, power, and hope.

Bok Choy is native to China, originally from the Yangtze River Delta, where it has been cultivated for thousands of years. In the 14th century, Bok Choy was transported via trade routes to Korea during the Joseon Dynasty, where it would become a key ingredient in kimchi. It was later introduced to Southeast Asia in the 16th century and Europe and North America in the 19th century via Chinese immigrants. Bok Choy flowers are a secondary culinary ingredient harvested from plants that have bolted. The flowers are not common in commercial markets, but they are sometimes sold as a seasonal specialty to chefs through distributors, retailers, and farmers markets. Bok Choy flowers can be found wherever the plants are grown, mainly in Asia and Southeast Asia. Bok Choy is also produced in Australia, South Africa, Europe, Canada, South America, the Caribbean, Central America, and the United States.


Recipes that include Bok Choy Flowers. One