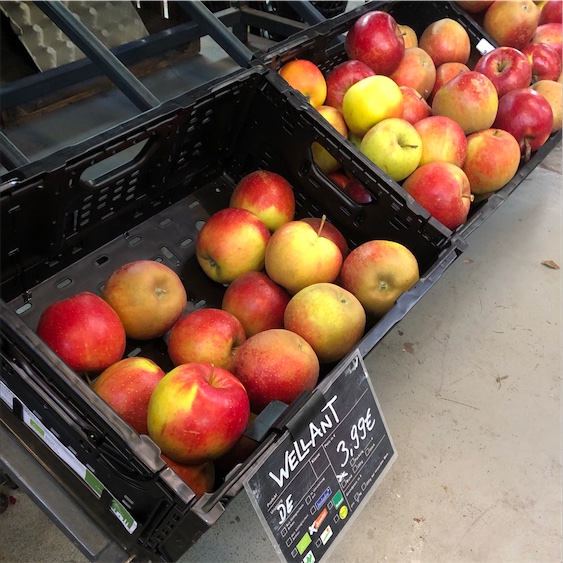 Unripe grapes are very small in size and are found in loose clusters growing on fibrous, medium-thick, pale green branches. The oval to round fruits have smooth and taut, light green skin and are connected to thinner stems that join into the larger branch. Underneath the skin, the flesh is crisp, aqueous, and also pale green, encasing many small seeds. When consumed fresh, Unripe grapes have a firm and crunchy consistency and contain a highly acidic juice with a very sour, sweet-tart flavor.

Unripe grapes are available for a limited time in the summer.

Unripe grapes, botanically classified as Vitis vinifera, are small immature fruits that grow on climbing vines and are members of the Vitaceae family. Harvested from the fields of wineries to thin out grape vines, Unripe grapes are a specialty item that is found in the summer and are sold as a secondary source of income by farmers and winemakers. Also known as Sour grapes and Ghooreh in Iran, Unripe grapes have a very acidic flavor and are used as a souring agent in savory dishes. Unripe grapes are also popular for their sour juice, known as verjus or verjuice, which translates from French to mean ‘green juice.’ Verjus is not fermented, nonalcoholic, and is used as a substitute for vinegar or lemon juice in cooking as a gentle source of acidity.

Unripe grapes can be consumed raw, but their very sour and acidic flavor must be diluted to become palatable. Whole Unripe grapes can be tossed into salads, sprinkled with salt or sugar, or mixed into soups and stews. Unripe grapes can also be ground into a paste or powder, juiced, or pickled for extended use. In Persian cooking, Unripe grapes are used as a souring agent and are known as Ghooreh. Used as a substitute for limes, Unripe grapes are utilized in popular recipes such as koofteh berenji, which are Persian meatballs with rice, dolmeh or stuffed grape leaves, khoresht bademjan which is an eggplant stew, or in ash ghooreh, which is a sour grape soup. In addition to using the grapes in whole and ground form, Unripe grapes can be juiced to make verjus and are used to flavor baked goods such as bars, pies, and tarts. The juice is also utilized as a marinade for fish, cooked into jam, used to make a light salad dressing, or used in craft cocktails. Unripe grapes pair well with ceviche, poultry, pheasant, mushrooms, thyme, parsley, and vanilla. The grapes should be used immediately for best quality and flavor. For prolonged storage, Unripe grapes can be stored in a plastic bag in the freezer. When juiced, verjus will keep 2-3 months when stored in a sealed container in the refrigerator.

Unripe grape juice or verjus has been utilized in Europe since ancient times for as long as grapes have been grown for wine. Rumored to have been utilized during the Roman Empire since 71 CE, verjus, formerly known as acresta, was used to add acidity to food before lemons became the acid of choice. The juice remained a staple ingredient throughout medieval times, especially in France due to a large number of wineries producing the extra grapes, but in modern times, the sour juice has largely fallen out of favor. With an abundance of vinegar and acids to flavor culinary dishes, verjus has become a specialty item that remains relatively unknown. Despite its lack of exposure, the sour juice is finding a niche market among wine lovers in the United States as the juice contains a milder acidity that will not disrupt the taste of wine when cooked in food. Many wine connoisseurs believe the juice does not corrupt the palate and should be used in culinary dishes that will be paired with quality wines.

Unripe grapes have been present since ancient times and cultivars of Vitis vinifera are believed to be native to regions of Central Asia and the Mediterranean. As grapes were spread across Europe, Northern Africa, and Asia, the first recorded use of Unripe grapes began around 71 CE in the Roman Empire and quickly spread to Northern Europe. Today Unripe grapes are used around the world as a flavoring agent and can be found at local farmers markets near wineries, in Persian grocery stores, and specialty grocers in the United States, Europe, Asia, Africa, South America, and Australia.


Recipes that include Unripe Grapes. One