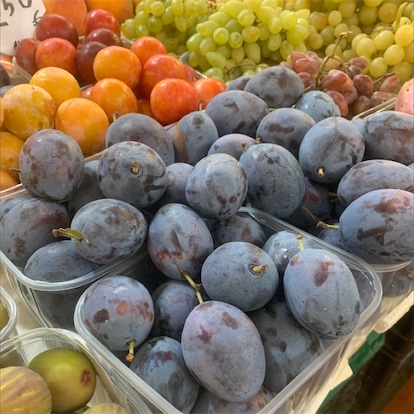 Micro Mint Lavender™ is comprised of 2 to 6 small leaves attached to a slender stem, averaging 5 to 7 centimeters in length. The green leaves are oval to lanceolate in shape with lightly serrated, curved edges, and the surface is covered in deep veini, creating a crinkled, textured appearance. The dark green leaves are also pliable, broad, and flat, attached to narrow pale green stems, contributing to the crisp, succulent, and tender consistency of the microgreen. Micro Mint Lavender™ is aromatic and has a robust, fresh flavor composed of subtly sweet, herbaceous, and floral notes followed by a cooling finish. It is important to note that the microgreens bear a strong floral aroma, mirroring their flavor, creating an experience that tastes as pleasant as it smells.

Micro Mint Lavender™ consists of young, edible seedlings that are a part of a trademarked line of specialty microgreens grown by Fresh Origins Farm in San Diego, California. The delicate, curated greens are a unique flavor combination of lavender and nt and were created as a complex, edible garnish for culinary dishes and mixology. Micro Mint Lavender™ is generally harvested 1 to 2 weeks after sowing, and the greens are gathered at the peak of their growth cycle to ensure optimum flavor and nutritnal properties. Micro Mint Lavender™ contributes cool, clean, and calming flavors mixed with whimsical shapes and textures to culinary dishes without overpowering the plate's main components. Chefs use the greens as an accent in savory and sweet dishe Micro Mint Lavender™ can be sprinkled across preparations for substantial visual impact, or individual leaves can be strategically placed on a dish to evoke a more delicate, artistic nature. In addition to being featured as a microgreen, Micro Minender™ is also offered as Petite® Mint Lavender™, a slightly larger, more mature version of the microgreen.

Micro Mint Lavender™ is a source of vitamins A and C, nutrients that boost collagen production, strengthen the immune system, and reduce inflammation. The microgreens may also contain lower amounts of potassium, magnesium, iron, and calcium. It is important to note that the vitamins and minerals are found primarily within the leaves and not in the stems of the microgreens. Growing conditions also significantly impact the nutritional content, and Fresh Origins cultivates their microgreens in a natural setting, an ideal climate for healthy, optimal greens.

Micro Mint Lavender™ is best suited as an edible garnish and provides a cooling, floral flavor to savory and sweet culinary dishes. The tender greens are primarily used as an accent since a little goes a long way and should be incorporated at the end plating to prevent the leaves from wilting. Micro Mint Lavender™ can be sprinkled over fruit and green salads, used as a garnish over roasted meats and pasta, or floated over soups. The microgreens can also be infused into oils and vinegar, chopped io salsa, or used to brighten flavors in jams, jellies, and sauces. In addition to infusions, Micro Mint Lavender™ can be muddled into cocktails, lemonade, teas, and sparkling beverages, or it can accent desserts, including panna cotta, puddings, cakestarts, and sweet buns. Micro Mint Lavender™ pairs well with berries such as strawberries, blueberries, and raspberries, meats including poultry, lamb, and turkey, shrimp, chocolate, vanilla, and herbs such as sage, rosemary, and thyme. It is recommend to use Micro Mint Lavender™ immediately for the best flavor, quality, and texture. The microgreens will also keep 5 to 7 days when stored unwashed, in a sealed container, and in the refrigerator.

Mint and lavender plants belong to the same botanical family, Lamiaceae, and have historically been incorporated throughout history for culinary, household, and medicinal uses. Lavender became especially popular in the 19th century, as it was one of Que Victoria’s favorite scents. Queen Victoria emphasized horticulture throughout her reign and often requested aromatic herbs and flowers be placed around her home as household scents. Lavender was the most used plant and was incorporated into her household cleaning agents, laundry soap, perfume, and culinary preparations. As the Queen continued to favor lavender, English residents also began using the plant's scent in their homes to emulate royalty, creating a countrywide trend. Lavender became associad with purity and cleanliness, and in the modern-day, lavender has continued to be widely used as a fresh scent. Micro Mint Lavender™ is a modern twist on classic lavender, combining the two well-recognized scents of lavender and mint into a singular, unique, and edible package. The microgreens also provide both aroma and flavor in a compact form to delight and surprise consumers to create an elevated dining experience.

Micro Mint Lavender™ was developed at Fresh Origins Farm in San Diego, California, the leading American producer of naturally grown microgreens since the mid-1990s. Fresh Origins has been using the mild, Southern California climate year-round to produce robust, healthy, and flavorful microgreens for over twenty years, and the farm closely partners with chefs to create innovative varieties with unique flavorings. Fresh Origins also has the highest level third-party-audited food safety program and is a rtified member of the California Leafy Greens Marketing Agreement, which follows science-based food safety practices to promote transparency and honesty in production. Today Micro Mint Lavender™ can be found through select distribution partners of Fresh Origins across the United States, including Specialty Produce, and are also found through partners in Canada.