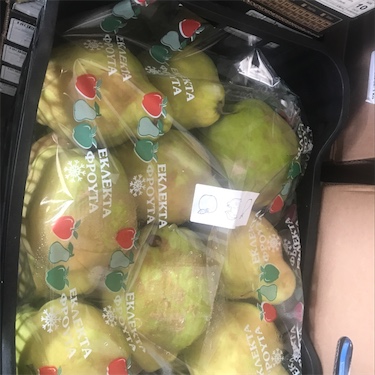 Davidson plums grow directly from the tree trunk appearing either individually or in small clusters. They are round to pear shaped and average 3 to 6 centimeters in diameter. Their exterior skin is smooth and ripens to a blue-black hue when fully mature, often falling to the forest floor when ready for harvest. Within the skin lies a soft and juicy flesh with a deep red pigment. Depending upon species Davidson plums can either have 2 large seeds or no needs. Davidson plums offer an earthy aroma and a flavor which is sour, astringent, slightly bitter, and void of sweetness.

Davidson plums are available for a brief season in the summer, from December to January in their native Australia.

The Davidson plum is botanically part of the Davidsonia genus which includes 3 different species; D. jerseyana, D. johnsonii and D. pruriens. While the fruits may share a common name with the standard plum, they are a member of the Cunoniaceae family and are completely unrelated. The Davidson plum grows almost exclusively in Australia where they are also referred to as Ooray or Sour plum. A recent resurgence in the demand for endemic fruits and vegetables known as “bushfood” has pushed the Davidson plum the forefront of select markets in eastern Australia.

The Davidson plum is known in its native home of Australia as a rich source for antioxidants, specifically anthocyanins, most of which are found in the skin of the fruit. Additionally, they supply vitamin C, iron, copper, potassium, calcium, vitamin E, zinc, and lutein.

The extremely sour Davidson plum was consumed fresh by indigenous populations but in modern times they are rarely eaten as a fresh fruit. Rather they are combined with other ingredients to balance out their flavor and used in a range of sweet and savory preparations. Use them similarly to rhubarb, cranberries or other naturally acidic fruits. Davidson plums can be cooked down to make sauces, preserves, chutneys, and pie fillings. They can be macerated or pressed to make marinades, glazes, and dressings. Additionally, they are used to make juice, wine, liqueurs, and cordials. Davidson plums should be kept refrigerated if possible and are best used within a few weeks.

The Davidson plum was named after renowned sugarcane grower J.E. Davidson of Queensland, Australia. Because of land clearing for agricultural and urban development, all wild Davidson plums are listed as an endangered and threatened species in New South Wales and are listed on both the Commonwealth Environment Protection and Biodiversity Conservation Act 1999 and the New South Wales Threatened Species Conservation Act 1995.

The Davidson plum is believed to date back tens of thousands of years and was a traditional food or “bush tucker” of the Australian Aborigines. It was not documented under the Davidson name until 1900 in the book “Edible Fruits Indigenous to Australia.” Davidsonia pruriens is native to north-east Queensland while Davidsonia jerseyana and Davidsonia johnsonii are native to north-east New South Wales. Today, the plum thrives in the coastal and lowland subtropical rainforest regions of New South Wales and Queensland, as well as some specialty southern California farms.

Recipes that include Davidson Plums. One