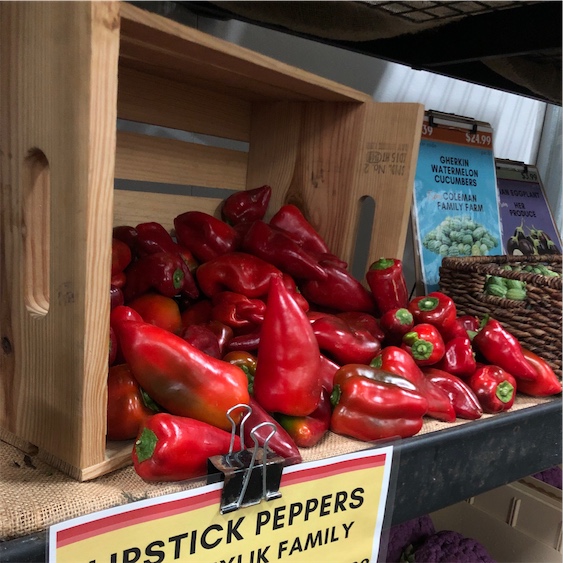 Garlic chives have larger flat stems versus the hollow thin spherical stems of other chive varieties. They grow in large clumps and can reach 50 cm tall when fully mature, but the spears themselves are harvested in the early spring when plant is a young sprout. Later into summer or fall when the blossoms fully open, their spherical white blossoms measure 5cm across and are composed of many tiny star-shaped flowers in a rounded umbel. Though the entire plant has an overall onion and garlic odor, the blossoms have a sweet violet aroma. On the palate they have a richer garlicky flavor than common chives, but retain a fresh grassy vegetal quality.

Garlic chive spears are available in the spring.

Garlic chives are botanically classified as Allium tuberosum and also known as Chinese chives or Chinese leeks. Like common chives, they are an herb in the onion family grown for their foliage and flowers rather than their bulb which is very fibrous and unpalatable. Garlic chive spears are harvested at the plant’s earliest flowering stage when the stems are still small and tender and the blossoms have yet to open. The tightly wound papery sheaths at the stem's tip will eventually open to reveal a white globe-shaped flower. Garlic chives spread aggressively and form large clumps, requiring periodic thinning every 3-4 years. They are entirely edible and may be grown for both culinary and ornamental purposes.

All members of the Allium family contain quercetin which can fight heart disease and cancer. They also have mild antibiotic properties and may be used to aid in digestion, fight off colds and boost the immune system.

Garlic chives are most often used in Asian cuisine and are a traditional element of Pad Thai. The tender young stems of Garlic chive spears may be chopped and used in place of common chives to add a garlicky essence. Use them to impart a subtle garlic flavor in dishes where the fresh clove of garlic may be too overpowering such as in delicate broths and salads. The entire spear may be treated as a vegetable rather than herb and blanched, sauteed, stir fried or grilled like a scallion or spring onion. Pair with fresh herbs, cheddar cheese, ricotta cheese, crème fraiche, potatoes, mushrooms, noodles, seafood, egg dishes, Thai and Chinese cuisine.

In Japan and China, the Garlic chive flowers are dried and ground to make a flavoring spice.

Garlic chives are native to Southwestern Asia, and have become an invasive weed in some parts of Europe and America. Garlic chives are a hardy perennial that is drought tolerant, but thrives with regular watering and full sun to partial shade. Garlic chive spears should be harvested in the early spring. Winter crops yield the best tasting leaves after a few frosts.

Recipes that include Garlic Chive Spears. One