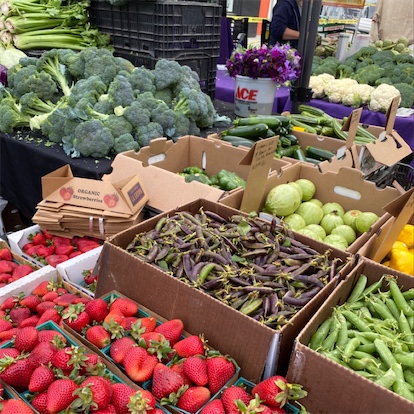 Pacific crabapples are small in size, averaging two centimeters in diameter, and are round to oblong in shape with long, thin, and slender light brown stems. The waxy, shiny skin is tough and transforms from green to hues of pink, yellow, and purple-red when mature. There are also prominent lenticels scattered across the smooth surface. The flesh is ivory, crisp, and firm, encasing a small central cavity with tiny, brown, inedible seeds. When ripe, Pacific crabapples are crunchy with a sharp, tart flavor. In addition to the fruit, Pacific crabapple trees bear deep-green, oval leaves with toothed edges and fragrant, white-pink blossoms in the spring.

Pacific crabapples are available in the fall through winter.

Pacific crabapples, botanically classified as Malus fusca, are the fruits of a small, deciduous tree or shrub that can grow up to twelve meters in height and are members of the Rosaceae family. Also known as the Oregon crabapple, Pacific crabapples are the only crabapple species native to British Columbia and are found growing in moist woodlands beside streams, lakebeds, and rivers. These crabapples have a rich history in providing food to the First Nation tribes in British Columbia, and today they are commercially cultivated for distribution across North America. Pacific crabapples are favored for their tart flavor and are commonly used in preserves and jellies.

Pacific crabapples are best suited for both raw and cooked applications such as boiling or baking. They can be consumed raw for a tart, crisp bite, or they can be cooked with honey and mashed to create a filling for desserts such as bread pudding or pies. They are also commonly boiled and cooked into preserves and jelly, or dried and used as a raisin on salads and in casseroles. A unique feature of the Pacific crabapple is their ability to develop a sweeter flavor. When stored in a cedar box under water, the acidity of the apple will cause the fruit to soften and sweeten while also preserving the flesh for extended use. Pacific crabapples pair well with maple syrup, honey, cinnamon, nutmeg, cloves, and vanilla. They will keep for a couple of weeks when stored in a plastic bag in the refrigerator.

Pacific crabapple trees were an important food source, medicinal ingredient, and construction material for the First Nation peoples in British Columbia. Many of the tribes such as the Makah would peel and soak the bark in water to create a concoction and would drink it to reduce symptoms of intestinal issues. The Samish and Swinomish tribes would also boil the bark to cleanse wounds and reduce stomach pains. In addition to the medicinal elements of the bark, the crabapples would be used as a food source, typically consumed raw or preserved, and the wood was used to make tools such as mallets, handles, and bows.

Recipes that include Pacific Crabapples B.C.. One