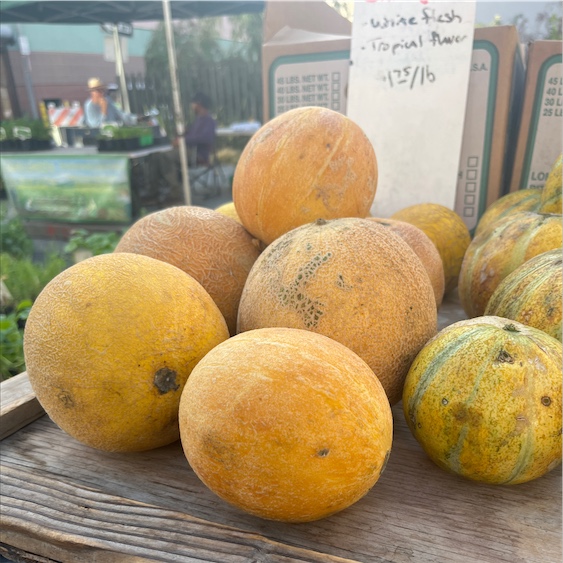 Karifurore cauliflower consists of a loose head made up of branching, slender stocks with small, clustered flower buds. The elongated stems are smooth, crisp, firm, and vibrant green. At the end of each stalk, there is a small grouping of white florets that have a dry, soft, and textured consistency. Karifurore cauliflower is crunchy, and the green stems contain the majority of flavor over the florets. The stems have a sweet, nutty, grassy, and earthy taste, and when mature, the cauliflower head will op slightly, resembling a bouquet of baby’s breath.

Karifurore cauliflower is available year-round, with a peak season in the late summer through winter.

Karifurore cauliflower is an excellent source of vitamin C, which is an antioxidant that can help boost the immune system and protect the body against external aggressors. The florets are also a good source of dietary fiber, vitamin K, and potassium.

Karifurore cauliflower is best suited for both raw and cooked applications such as roasting, sautéing, stir-frying, blanching, and steaming. The raw florets are prized for their flower-like appearance and are primarily served fresh on crudité plates, tossed into salads, or paired with thinly sliced meats. Karifurore cauliflower can also be cooked and retains its crisp consistency and bright green coloring. The florets can be fried into tempura, stir-fried with spices, tossed into soups, curries, and stews, lightly blanched and served with fresh herbs as a side dish, or pickled for extended use. Karifurore cauliflower pairs well with parmesan, mozzarella, lemon juice, red bell peppers, snow peas, mushrooms, asparagus, corn, carrots, pork belly, bacon, seafood, tofu, and sesame. The flowering heads will keep up to one week when stored in the refrigerator.

Five is a favored number deeply embedded into the lifeblood of Japan. There are many theories as to how the number became interwoven into Japanese culture, stemming from Buddhist teachings, elemental theories, to the five senses, but regardless of its origins, five is one of the foundational rules in traditional Japanese cuisine. A well-balanced, aesthetically pleasing meal is said to contain five flavors, appeal to the five senses, and contain five different colors. Of the five senses, Japanese chefs consider sight to be one of the most important, as the visual nature of a dish is seen before the flavors are even experienced. With aesthetics in mind, Karifurore cauliflower has become a favored ingredient among Japanese chefs for its simplistic beauty and resemblance to a flower bouquet. The delicate heads are often separated into small florets and are strategically placed on top of dishes as a sweet, edible garnish. The improved, crisp bunches were designed to inspire chefs to reinvent perceptions surrounding cauliflower.

Karifurore cauliflower was developed by the Tokita Seed Company in Japan and was released to commercial markets in 2012. It took over seven years to develop the hybrid variety, and the cauliflower is mainly produced in the regions of Okinawa and Hokkaidin Japan. Today Karifurore cauliflower has seen commercial success around the world and can be found at farmer’s markets and specialty grocers in Japan, Australia, Europe, the United States, and South Africa.

Recipes that include Karifurore Cauliflower. One