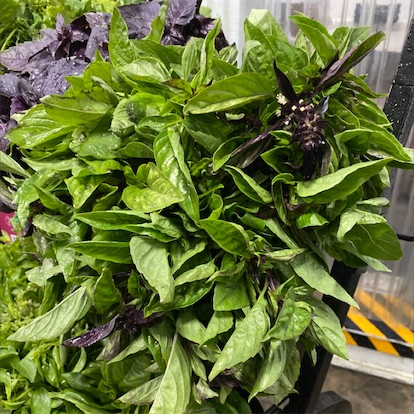 Green Kpakpo Shito peppers are very small in size, averaging 2-3 centimeters in diameter, and have a compact, squat, bell-shape with 3-4 lobes attached to long, slender green stems. The wrinkled skin is firm, glossy, and green when young, transitioning to orange and then red with maturity. Underneath the surface, the flesh is crisp, aqueous, and green, encasing a hollow central cavity filled with tiny, round cream-colored seeds. Green Kpakpo Shito peppers have a fruity fragrance and sweet, spicy flavor that is not as hot as common habaneros but still contains a moderate heat.

Green Kpakpo Shito peppers, botanically classified as Capsicum chinense, are tiny, immature fruits that grow on a medium-sized, upright leafy plant and are members of the Solanaceae or nightshade family. Derived from Ga, a Ghanaian language spoken in the capital city of Accra, Ghana, shito means pepper and the small green pepper is favored by Ghanaians for its fruity, spicy flavor, measuring around 37,500 Scoville Heat Units on the Scoville Scale. Also known as Pettie Belle and Cheeky peppers, Green Kpakpo Shito peppers are most famously used to make a spicy green salsa known as Kpakpo Shito sauce, named after the pepper.

Green Kpakpo Shito peppers are an excellent source of vitamin C and also contain potassium, calcium, vitamin A, and iron.

Green Kpakpo Shito peppers are best suited for both raw and cooked applications such as boiling and sautéing. Due to the pepper’s miniature size, it is most commonly chopped and added to sauces, stews, and salsas. When used in sauces, Green Kpakpo Shito peppers are mixed with ingredients such as onion, garlic, ginger, tomatoes, scotch bonnet peppers, bell peppers, and salt, and the ingredients are traditionally blended with a mortar and pestle for a smooth consistency. These sauces can also be mixed using a blender and are served in stews and soups or over fried fish, grilled plantains, fried yams, and grain bowls. Green Kpakpo Shito salsa can be utilized raw, or it can be cooked over low heat to combine flavors. It can also be used as spread on cheeseboards or mixed into ground meat to make spicy meatballs. Green Kpakpo Shito peppers will keep 1-2 weeks when stored whole and unwashed in the refrigerator.

Green Kpakpo Shito sauce is one of the most popular condiments in Ghana, especially among the Ga people in Accra, Ghana. Used on fried fish, grilled lamb, or pan-fried liver and served with banku or kenkey which are paste-like doughs, Green Kpakpo Shito sauce is made with a variety of ingredients depending on the favored spices and culinary traditions of the region. In Ghana, the sauce is often made fresh and sold on public beaches, served in restaurants, or is mixed at family picnics for a fresh, fruity, and spicy condiment. The sauce is also so popular in Ghana that it is being infused with other cuisines such as Chinese and is topped over steamed rice, fried rice, and on spring rolls.

Green Kpakpo Shito peppers are native to Africa, but their exact origins are mostly unknown. Believed to be a habanero variety, habanero peppers came to Africa from South America via Spanish trade routes and were spread throughout the continent, especially to Western Africa. With their introduction to Western Africa, new varieties of peppers were developed over time through cultivation, eventually creating the Kpakpo Shito. Today Green Kpakpo Shito peppers are found in backyard gardens and are cultivated on a small scale in regions across Western Africa, specifically in Ghana.

Recipes that include Green Kpakpo Chile Peppers. One