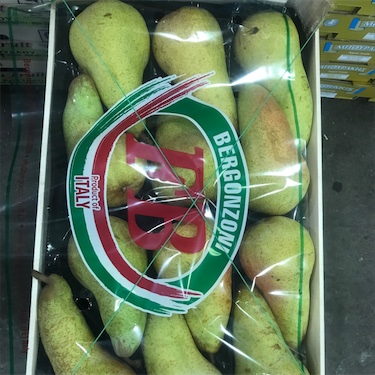 Sugar Rush Peach chile peppers are elongated pods, averaging 7 to 15 centimeters in length, and have a cylindrical shape that tapers to a point on the non-stem end. The skin is smooth, glossy, may appear lightly wrinkled or creased, and ripens from light green, golden yellow, to dark peach when mature. Underneath the surface, the flesh is semi-thick, crisp, pale yellow to peach, and aqueous, encasing a central cavity filled with membranes and many small, round, and flat, cream-colored seeds. Sugar Rush Peach chile peppers have a bright, floral, and fruity flavor with nuances of citrus, apricot, and peach followed by a moderate to hot level of spice.

Sugar Rush Peach chile peppers are available in the summer through fall.

Sugar Rush Peach chile peppers are an excellent source of vitamins A and C, which are antioxidants that can improve vision, boost the immune system, and help rebuild collagen within the body. The peppers also contain copper, potassium, and capsaicin, which is a chemical compound that triggers the brain to feel spice or heat. Capsaicin has been shown to provide antioxidant and anti-inflammatory properties.

Sugar Rush Peach chile peppers are best suited for both raw and cooked applications such as grilling, boiling, roasting, or sautéing. The peppers can be sliced and tossed into salads, minced into ceviche, consumed fresh, out-of-hand as a sweet and spicy snack, or chopped and added to salsas, hot sauces, and marinades. They can also be cooked into omelets, stuffed with cheeses, tossed into soups and stews, mixed into beans, or roasted for a smoky flavor. In addition to whole or sliced preparations, Sugar Rush Peach chile peppers are popularly made into jams and jellies and are used to flavor homemade ketchup recipes to add a sweet and fiery taste. They can also be pickled for extended use as a condiment. Sugar Rush Peach chile peppers pair well with herbs such as cilantro, mint, and parsley, cherry tomatoes, meats such as poultry, beef, fish, and pork, red onion, avocado, and cucumbers. The fresh peppers will keep up to one week when stored whole and unwashed in a paper or plastic bag in the refrigerator.

Chris Fowler, creator of the Sugar Rush Peach chile pepper, began growing chile peppers in 2004 out of a desire to try a fresh jalapeno, a pepper that was unavailable in his local markets. What initially started as a simple hobby quickly grew into a passion, and Fowler made a deal with a local factory to construct a polytunnel to expand his pepper cultivation. Today Fowler grows over three hundred different varieties of chile peppers through his company known as Welsh Dragon Chilli in Wales, Great Britain. Sugar Rush Peach chile peppers are one of Fowler’s most popular varieties, and he has since created multiple variations, including the sugar rush peach bell pepper and the sugar rush peach twisty pepper. In addition to cultivating and growing peppers, Fowler also sells homemade chili sauces that he creates using his peppers and sells the sauces through social media platforms and the Cardiff Riverside market in Wales.

Sugar Rush Peach chile peppers were discovered in 2012 as an open pollination of South American sugar rush red chile peppers in the garden of Chris Fowler, chile pepper breeder, in Wales, Great Britain. Fowler enjoyed the pepper’s unique sweetness and moderate heat, deciding to stabilize the variety for use in breeding and cultivation. Sugar Rush Peach chile peppers were initially sold through Fowler’s company Welsh Dragon Chilli, and over time the variety has expanded and is now also sold through online seed catalogs and specialty growers. The peach-colored peppers are still considered to be somewhat rare, not grown commercially, and are most commonly found through home gardens in Europe, North America, and Australia.

Recipes that include Sugar Rush Peach Chile Peppers. One