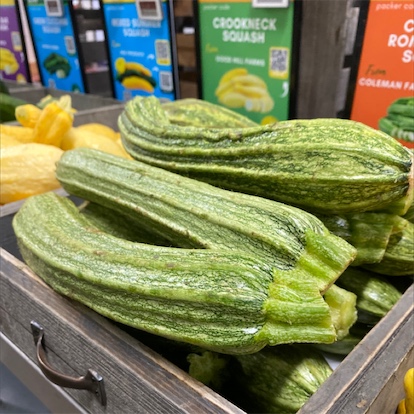 Black Futsu squashes have a squat, blocky shape, averaging 3 to 5 pounds, and are heavily ribbed with bumpy, textured skin sometimes covered in warts. The skin is dark green, almost appearing black when young, and transforms into a tawny, pale orange-brown with maturity. The surface may also be covered in a blue-grey bloom or film, creating a dusty, rough texture. Underneath the thin skin, the flesh is firm, fine-grained, crisp, and bright orange, encasing a central cavity filled with stringy fibers and oval and flat, cream-colored seeds. Black Futsu squashes, when raw, have a sweet and slightly nutty flavor, and when cooked, the flavor deepens into a taste similar to roasted chestnuts with a smooth, creamy texture.

Black Futsu squashes are available in the fall through winter.

Black Futsu squash, botanically classified as Cucurbita moschata, are an early-ripening winter variety that belongs to the Cucurbitaceae family. Considered to be an ancient heirloom squash, Black Futsu squashes are a rare, specialty variety that has beecultivated since the 17th century in Japan. The squashes are widely popular across Asia and Southeast Asia, consumed in both raw and cooked applications, and have seen a recent increase in notoriety in the United States and Europe as a farmer’s market and home garden cultivar. Black Futsu squash are highly productive, compact plants with extended storage capabilities and are valued for their edible, thin skin and sweet, nutty flavor. They are also used ornamentally in the fall and winter for their color-changing flesh and dusty appearance.

Black Futsu squashes are an excellent source of vitamins A and C, which are antioxidants that can help repair the skin, improve vision, and boost the immune system. The squashes also contain some fiber, calcium, beta-carotene, and iron.

Black Futsu squashes are best suited for both raw and cooked applications such as baking, roasting, boiling, and stir-frying. The skin is thin and does not require peeling before consumption, providing a slightly chewy texture. Black Futsu squashes can be sliced thinly and added raw to salads, slaws, or layered on cheese and fruit plates. They can also be battered and fried into tempura, lightly stir-fried with winter vegetables, tossed into soups and stews, sliced into wedges and roasted, or stuffed with grains, meats, or cheeses. In addition to savory applications, the sweet, nutty flavor of Black Futsu squash blends well in pies and baked goods. The squashes can also be pickled for extended use. Black Futsu squashes pair well with herbs such as rosemary, sage, and parsley, fennel seeds, spices such as turmeric, paprika, cayenne, and cinnamon, honey, ginger, greens such as chicory, kale, and radicchio, raisins, dried cranberries, honey, coconut milk, tahini, ginger, rice, pecorino cheese, and sesame seeds. The squashes will keep up to six months when stored whole in a cool, dry, and dark place.

At the end of every December, toji, also known as the winter solstice, is celebrated in Japan on the shortest day of the year. Toji is a celebration based on the concept of yin & yang, believing that while the event takes place on the longest and darkest night of the year, spring will be returning soon to bring warmth, balance, and light. During the solstice, many Japanese participate in baths filled with yuzu and consume warm foods to ward off sickness. Pumpkin, including the Black Futsu squash, is a traditional food prepared during the solstice, valued for its bright orange flesh, and is often paired with red bean in a sweet bean soup to symbolize good luck, sunlight, and protection from evil.

Black Futsu squashes are native to Japan and have been cultivated for hundreds of years. This ancient variety was believed to have been an open-pollinated cultivar bred from New World squash that was first introduced to Japan from Portuguese explorers ithe 16th century. Today Black Futsu squashes are still cultivated in regions across Japan, especially in the Miyazaki prefecture, and are found throughout Asia and Southeast Asia. The squashes are also available at farmer’s markets in Europe and the United States and through online seed catalogs for home garden use.

Recipes that include Black Futsu Squash. One