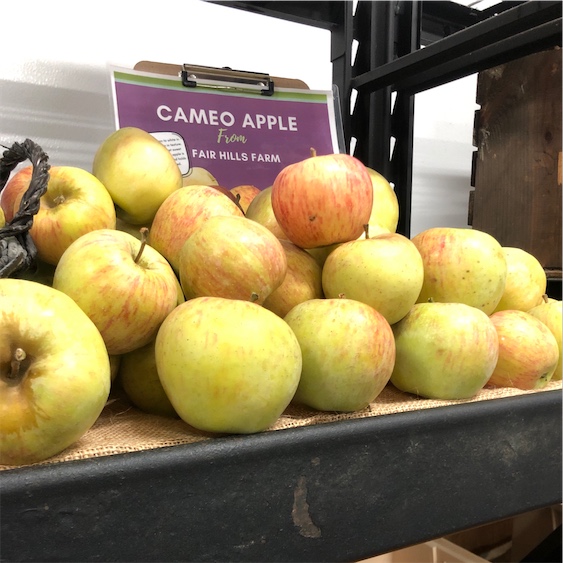 Large asparagus are varieties that maintain their quintessential textural and flavor qualities even at mature sizes. They have plump pale green stalks with knobby scales and cruciferous-tree shaped tips. They are firm in texture with balsam aromatics and their flavor is grassy, nutty and earthy sweet.

Asparagus appears in markets year-round, the peak of this crop's season is in spring.

Asparagus, botanical name Asparagus officinalis, is a member of the Liliaceae family. It is a perennial herb with an underground rhizome known as the plant's crown. It is cultivated for its edible young stems, known as spears, which emerge in spring and summer. Large asparagus are harvested and sold in uniform sizes according to the diameter of the spears. The thickness varies minimally, marketed at 17 to 19 mm (roughly two thirds of an inch).

Asparagus is an excellent source of Vitamin K. It also contains more glutathione than any other fruit or vegetable. This antioxidant plays an important role in the prevention of certain cancers and diseases, nutrient metabolism and regulating DNA and protein synthesis.

All asparagus spears should be snapped at their natural breaking or bending point. Discard the lower parts as they are more fibrous and woody. Jumbo asparagus can be sauteed, steamed, boiled, baked and fried. Spring ingredients such as morel mushrooms, green garlic, wild ramps, fennel, leeks, young lettuces and citruses such as lemon and grapefruit are most suitable pairings. Other complimentary ingredients include aged nutty cheeses such as pecorino and alpine cheeses, bacon, sausage, lamb, proscuitto, cream, eggs, butter, shallots, herbs such as thyme, basil and chervil, yeasty breads like sourdough and wheat and grains such as aborio rice, quinoa and farro.

Asparagus is native to most of Europe, northern Africa and western Asia. Though widely found growing wild it is has been cultivated as a vegetable crop for centuries. The cultivation of asparagus is a long term commitment. Not only does it take two to three years for the plant to yield its first crop, the plants can potentially continue to produce from fifteen to thirty years of harvests. Asparagus plants are prolific growers, creating ten inch shoots that emerge from the soil within 24 hours under ideal growing conditions. You may witness asparagus "growing" once picked. This is because asparagus spears absorb moisture from the air which creates a swelling in size. Feathered fern-like foliage and flowers indicate the end of the plant's season for the year. Its seeds are carried by birds, allowing for domesticated crops to easily escape into wild domain, creating future populations. As it was historically found growing in maritime regions, it prefers sandy weedless soils. Cultivated and wild asparagus thrive in temperate regions of North America and Western Europe.

Restaurants currently purchasing this product as an ingredient for their menu. the other 104...

Recipes that include Large Asparagus. One