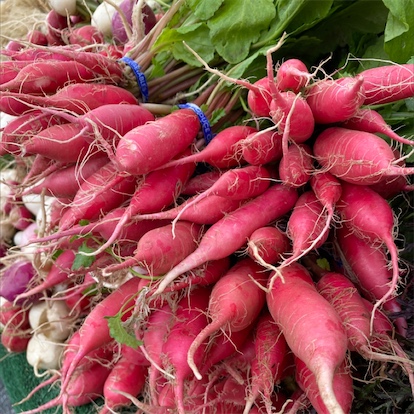 The immature pale green skin of the Bilva fruit becomes sunshine yellow then a mottled brown when ripe. Roughly about the size of a large orange, the outer skin of the Bilva fruit can be described as woody and hard and must be cracked open using a stone or hammer. Within the hard shell of the Bael fruit are many seeds growing in small cavities surrounded by a fibrous flesh and a fruity and aromatic, juicy pulp. Bilva fruit tastes similar to Passion fruit. When sliced and dried, the fruit resembles bicycle wheels.

The Bilva fruit can be found growing year-round in tropical climates, with a peak season in the fall months.

Bilva fruit is botanically known as Aegle Marmelops, from the Bael Tree and is often called ‘Stone apple’ or Bilwa. Bilva fruit is a member of the citrus family. The tree itself is worshipped as Lord Shiva’s tree in India and its three-lobed leaves are used in the ceremonial worship of the deity. The Santhal tribes in India worship the tree as a totemic deity. Indians sometimes refer to the Bilva tree as 'the fruit of plenty' because it serves as a sustaining food as well as a medicine.

Known in Hindi as "Bel," Bilva fruit is eaten either fresh or dried. The dried fruit is crushed into a powder and used in candy, or reconstituted in water and drained in a sieve for beverages. In India a popular thirst quencher is made with Bilva fruit and jiggery, which is evaporated raw sugarcane juice.

In Ayurvedic medicine, every part of the Bilva tree can be used for medicinal purposes. The immature Bilva fruit is roasted under mud, pureed and mixed with water and sugar or buttermilk to be used as an anti-inflammatory and antimicrobial, as well as for the treatment of digestive issues and diabetes. The fruit is also said to be good for the heart and the brain. Also called Bilwa, the tree and fruit are considered to be emblems of fertility in India.

The fruit, also known as Bengal Quince, is native to India and has likely existed since 2000 BC when the first of the Indian Vedas, or sacred texts, were written. Bilva trees can be found growing in and around most Shiva temples in India. The tree also grows in dry arid soil of Vietnam, Pakistan, Sri Lanka and Bangladesh. The fruit is foraged in the jungles and on the hillsides in India and is most commonly found in farmer’s markets.

Recipes that include Bilva Fruit. One