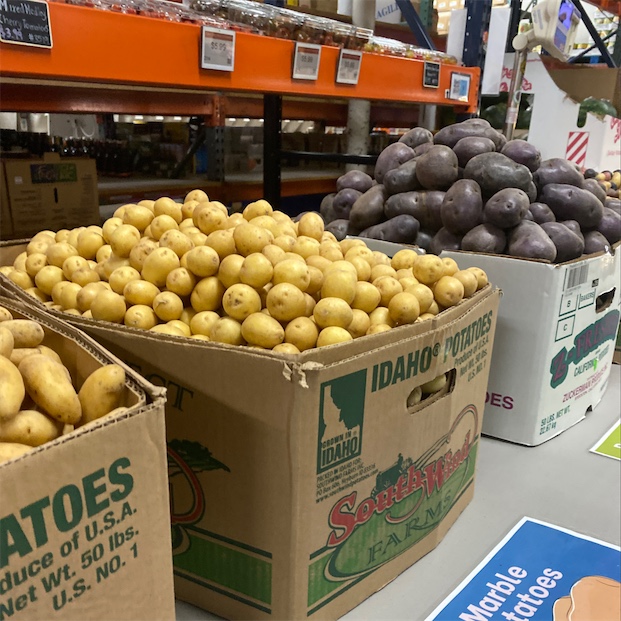 Rue is a long-stemmed bushy shrub with fern-like, lobed leaves. The bluish-green leaves sit sparingly and alternately on the tops of the stems. Once the plant’s small yellow flowers fade, the four-lobed seed pods develop. The plant emits a pungent aroma that can be both noxious and sweet. Under the bitterness lies a sweet, citrus-like flavor The oils in the stems and leaves of Ruta graveolens can be irritating to sensitive skin and when affected skin is exposed to sunlight, can result in photosensitivity or contact dermatitis. Care must be taken when handling Rue.

Rue can be found growing year-round in temperate climates.

Rue is a perennial herb, commonly known as Garden Rue, Herb of Grace, or by its botanical name, Ruta graveolens and is a member of the citrus family. Rue has been used since ancient times and is mentioned in works by Shakespeare and Pliny, whose writings date back to the first century AD. Rue has a long history of medicinal uses, though in the culinary world it is mostly known as a flavoring for the Italian liquor, Grappa al Ruta.

Rue is most often used in Ethiopian cuisine. The herb is used in small quantities (most often single leaves) in salads, meat and egg dishes and mixed with soft, spreadable cheeses. Rue is most commonly used to flavor coffee in Ethiopia; sprigs of Rue are steeped in coffee and give it a hint of citrus flavor. When used in cooking, the herb should be removed before serving a dish. Steeping the herb for a few minutes in a broth or sauce will impart less of Rue’s bitter taste and more of its citrusy flavor. Rue should not be ingested by women who are pregnant.

Rue contains rutin, a flavonoid which has been shown to strengthen the capillaries in the eyes. In Medieval times, Rue was used as an eye strengthener and was used to improve sight and give strength to weary eyes. This use may have also led to the belief that Rue would bestow the user with the gift of second sight. At one time, dried Rue was applied to bee stings or rheumatic joints to dispel the inflammation. Medicinal uses date back centuries and include the use of Rue as an antidote to poison, a treatment for epilepsy and to ward off vertigo Rue was strung around the neck.

Rue is native to the Mediterranean, and can be found in similar temperate climates around the world. Rue is harvested just before it flowers, typically in the late spring though the plant is evergreen. Historically, the upper portion of the plant was harvested, because the greatest benefits of the plant were said to be in the topmost leaves. The bitter and pungent aroma was considered a natural repellent for pests and Rue still serves as an ornamental insect deterrent in home herb and flower gardens. The potential toxicity of the plant and its bitter aroma and taste has made it less popular as a culinary herb over the centuries, though in Ethiopia Rue is not considered toxic if it is used appropriately.

Someone shared Rue using the Specialty Produce app for iPhone and Android.