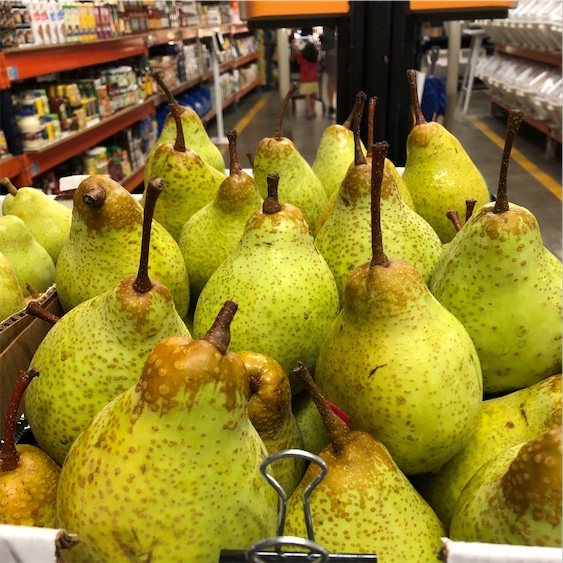 Redlove® apples vary in size and appearance, depending on the specific variety within the Redlove® line, but generally have a round, conical, to oval shape. The skin is smooth, glossy, waxy, and dark red, with prominent white pores known as lenticels. Underneath the surface, the flesh contains a unique marbling of dark pink-red hues with a white halo surrounding the core. The flesh is also crisp, firm, juicy, and fine-grained. Redlove® apples emit a strong, fruity-sweet aroma and have a balanced sweet-tart flavor with tangy nuances of berries and cherries.

Redlove® apples are available in the fall through winter.

Redlove® apples, botanically classified as Malus domestica, is a general descriptor used for a line of several hybrid cultivars that belong to the Rosaceae family. Bred by Markus Kobelt in Switzerland, Redlove® apples were created from over twenty years of natural, non-genetically modified, cross-pollination trials. Within the line of Redlove® apples, cultivars include Redlove® Circe®, Redlove® Odysso®, Redlove® Calypso®, and Redlove® Era®, and each variety exhibits the unusual dark red skin with marbled, pink, red, and white flesh. Redlove® apples get their name from their deep red coloring and from a distinct heart-shape that is formed within the flesh when the apple is quartered. The hybrid varieties are favored as a specialty line of red-fleshed fruits, valued for their novel, dark hues, and are utilized as both a fresh eating and cooking apple.

Redlove® apples are an excellent source of anthocyanins, which is a compound found in the apple’s dark red flesh and skin with antioxidant-like effects that can help protect the immune system and defend against environmental aggressors. The apples are also a good source of fiber and contain potassium, vitamin A, and vitamin C.

Redlove® apples are best suited for both raw and cooked applications, such as baking. The marbled flesh does not oxidize and turn brown when sliced, allowing it to be highly used in green and fruit salads. The apples can also be eaten out-of-hand, quartered and displayed on appetizer plates, or pressed into juice, cider, or wine. In addition to raw applications, Redlove® apples are popularly blended into applesauce, dried for extended use as a snack or garnish, or baked into tarts, cakes, and pies. Similarly to the flesh not oxidizing when fresh, Redlove® apples also do not lose color when cooked, giving the dessert an attractive, pink-red hue. Redlove® apples pair well with nuts such as almonds, walnuts, and pecans, spinach, arugula, cheeses such as feta, brie, and goat, blueberries, and grapes. The fresh apples will keep 1-2 months when stored in a cool and dark place.

Redlove® apples are one of the first successful European red-fleshed varieties created for commercial production. The apples were initially developed as a red-fleshed variety that would grow well in the colder regions of Europe, such as the United Kingdom, but with increasing global recognition, the variety has also expanded into China and Australia in hopes of growing apple sales. The dark red apples are marketed worldwide for their high antioxidant content, and with the recent health-focused shift in the market, consumers are using Redlove® apples to add natural color, vitamins, and minerals to their dishes. Redlove® apples have also become a popular ingredient in the non-alcoholic drink movement. Restaurants are expanding their drink menus to offer healthy, signature mixed beverages using fruit juices and sparkling water. They are also using fresh and dried slices of the apple on the edge of the glass to showcase the marbled flesh for increased visual appeal.

Redlove® apples were created by Markus Kobelt in 2010 in Rhine Valley, Switzerland. It took Kobelt over twenty years to develop the apple line through several natural, cross-pollination trials, which included breeding in scab resistant properties. Kobelt has remained very private when discussing the Redlove® lineage, but it is rumored that the hybrid apples were developed from a wild red-fleshed apple found in Kazakhstan mixed with other apple varieties. Today Redlove® apples are a protected line that is exclusively licensed through the Swiss-based company Lubera. The dark-red apple varieties have been licensed to select growers in Switzerland, the United Kingdom, Central Europe, Australia, China, and North America, and once grown, the apples can be found through specialty grocers and farmer’s markets.

Recipes that include Redlove® Apples. One