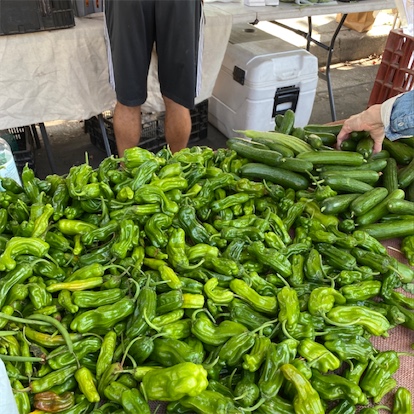 Yellow Cactus pears are small to medium in size, averaging 5-10 centimeters in length, and are oblong in shape similar to a kiwi or small avocado. The fruits form from yellow, pink, red, or purple flowers that grow on nopales or cactus pads, and the thick skin of the fruit is golden yellow and may have some patches of pink and light orange blush. Yellow Cactus pears are also covered in rough bumps and spines known as glochids. These sharp spines are tiny, hair-like, and difficult to see and are found in the areoles or brown spots on the skin. Inside the fruit, the yellow-orange flesh is moist and watery with many hard, edible brown-black seeds. The seeds are too tough to chew fully and can be swallowed whole or discarded completely. When ripe, Yellow Cactus pears are juicy and aromatic offering a mildly sweet flavor reminiscent of citrus, banana, melon, and fig.

Yellow Cactus pears are available in the late summer through early winter.

Yellow Cactus pears, botanically classified as a part of the genus Opuntia, are the annual edible fruits that grow on the edges of the flat pads of the cactus and are members of the Cactaceae family. Also known as Cactus apple, Prickly pear, Barbary, Tuna fruit, and Indian Fig, there are many different varieties of cactus pears that can range in color from yellow, red, orange, to green. Despite its name, Yellow Cactus pears are not members of the pear family and were given this name in reference to their similarity in shape. Yellow Cactus pears are most commonly found across Italy and are botanically considered a berry. The yellow varieties are less sweet than their red counterparts, but they are favored as an end of summer treat in Italy for their juicy flesh. Yellow Cactus pears can be incorporated into a wide variety of culinary applications and are preferred to be consumed fresh.

Yellow Cactus pears are best suited for raw preparations as their mild flavor often gets masked in the cooking process. The spines must be removed before use and can be burned or scrubbed off using gloves and tongs. The skin also needs to be removed and can be slowly peeled away from the flesh. Once prepared, Yellow Cactus pears can be consumed raw or chilled. They can be scooped out with a spoon or cubed and used in fruit salads, smoothies, on top of oatmeal and yogurt, in acai bowls, cereal, and in salsa. The raw flesh can also be pureed to use on ice cream, with yogurt, or in sorbets. Cooked Yellow Cactus pears can be transformed into jams, syrups, or as pie filling. Yellow Cactus pears compliment chicken, shrimp, other tropical fruits such as lemon, lime, and banana, watermelon, and honeydew melon. They will keep 1-2 weeks when stored in the refrigerator.

In Italy, Yellow Cactus pears are one of the most popular varieties and are used as fences between properties in Sicily. According to Sicilian legend, a farmer cut all of his neighbor’s cactus pears off to prevent him from enjoying the fruit only to have the fruit grow back larger and juicier. This practice of cutting off the first fruits is known as scozzolatura, and the cactus pears also gained the nickname of bastardoni, which is an affectionate and playful term that means bastard indicating the fruits separation from the parent plant. Many street vendors will shout this nickname when they are selling Yellow Cactus pears in the marketplace.

Native to Mexico and the Americas, both the pears and pads of the prickly pear cactus have been used since ancient times and eventually made their way to Europe via explorers and expeditions. Spreading throughout the Mediterranean, the fruit became extremely popular in Sicily where it thrived in the dry terrain and warm climate. Yellow Cactus pears are still one of the most popular varieties of cactus in Italy today. The fruit also thrived in the climate of Australia, and some consider the plant to be a prolific weed. Commercial farming of the cactus pear in the United States began in the early 1900’s by a Sicilian immigrant in California by the name of Marco Rancadore. Today Yellow Cactus pears can be found at local farmers markets and specialty grocers in the Southwestern United States, Mexico, Northern Africa, Middle East, the Mediterranean, Australia, Southern Asia, and select regions of the South Pacific.

Recipes that include Yellow Cactus Pears. One