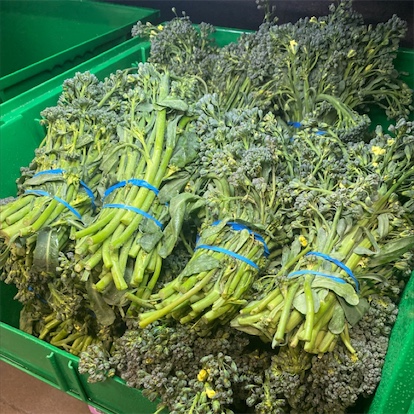 Candlestick fruits are elongated and cylindrical, averaging 30 to 50 centimeters in length, and have a unique growth pattern of attaching directly to the trunk and branches of the tree. The fruits develop from white, bell-shaped flowers that are pollinated by moths and bats, and hundreds of fruits can grow on a single, mature tree. Candlestick fruits have waxy, smooth skin, ripening from green to yellow, and the non-stem end of the fruit tapers slightly to a small point. Underneath the surface, the pale-yellow flesh is fibrous, spongy, and juicy, containing many small, edible, flat seeds. Candlestick fruits are said to emit an apple-like aroma and have a mild, sweet, and sour flavor reminiscent of bell peppers and sugarcane.

Candlestick fruits, botanically classified as Parmentiera cereifera, are unusually shaped, fibrous berries belonging to the Bignoniaceae family. The species name comes from the Latin word “cera,” meaning wax, and “fero,” meaning to carry, and the fruits earned their name from their candle-like appearance. Candlestick fruits are also known by many local names throughout Central and South America, including Pale de Cera, American Camburita, Arbol de Vela, and Palo de Velas. The elongated fruits are not commercially cultivated, viewed primarily as an ornamental, but they are gathered on a small scale from wild trees in tropical forests for medicinal uses. Despite the fruit’s unique appearance, Candlestick trees have suffered from significant habitat loss and are listed as endangered by the International Union for Conservation of Nature.

Candlestick fruits are a good source of fiber and contain flavonoids, which are antioxidants that can help boost the immune system and reduce inflammation. The fruits also provide tannins and saponins, which are chemical compounds that have been shown to contain antibacterial properties.

Candlestick fruits were utilized as a natural medicine in the Maya Empire, which was one of the most advanced civilizations in Mesoamerica in the 6th century. The Mayans would roast the fruits and consume them as a digestive cleanser, and they also believed that the fruits offered soothing properties to fight against the common cold. In addition to the fruits, the leaves of the tree were steeped in boiling water to create a healing tea, which was used for the throat and as a tonic for ear infections. In the modern-day, some villages throughout Central America and Mexico still use Candlestick fruits as medicine. These villages have also begun using the fruits as cattle feed. It is rumored that if the cattle eat too many Candlestick fruits, their meat, when slaughtered, will contain a faint, apple-like aroma, just like the fruit.

Candlestick trees are native to Panama and are found throughout Central and South America. The fruit-filled trees have been growing wild since ancient times and are primarily found in tropical evergreen forests at low altitudes with high rainfall. Outside of Central and South America, Candlestick trees can be found throughout Mexico and are grown sporadically in parks or botanical gardens in Australia and Florida.