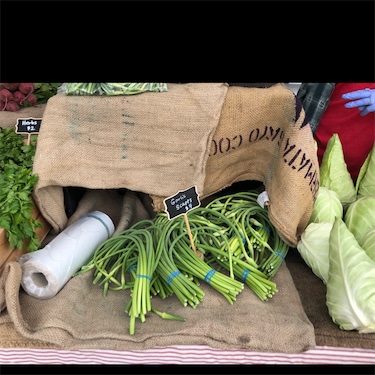 Royal Kay cherries have a classic cherry shape, rounded with a slight indentation at their stem end, giving them the appearance of a heart. The skin of the fruit is smooth and shiny and boasts a light cherry red hue. Royal Kay cherries have shorter stems and larger fruit bodies when compared to other cherry varieties and will have a medium firmness when ripe. Their smooth flesh is both meaty and juicy and offers a balanced sweet cherry flavor.

Royal Kay cherries are available in the late spring and early summer.

Royal Kay cherries are a sweet cherry variety botanically known as part of Prunus avium and a member of the Rosaceae family. A relatively new variety, the Royal Kay cherry was bred with the intention to create a cherry that would meet the needs of the California commercial cherry growing region. The variety was bred to be an early and productive producer of quality fruits that would exhibit not only a desirable flavor and texture but also would be sturdy enough for commercial handling and shipping.

Royal Kay cherries offer antioxidants, anthocyanins, melatonin, and potassium. Additionally, they have anti-inflammatory properties and are low on the glycemic index.

Royal Kay cherries can be used in both fresh and cooked preparations that call for sweet cherries. Their most beloved and classic use is served simply as a snacking fruit. They can also be pitted and used in preparation of desserts such as pies, ice cream, sorbets, tarts, and breakfast pastries. Pitted cherries can be cooked down to make sauces and preserves or they can be frozen and saved for use long after their season has passed. Royal Kay cherries pair well with vanilla bean, dark chocolate, pistachio, almonds, pork, beef, kale, mint, coconut, lime, plums, apricots, peaches, mascarpone, and ricotta cheese. To store keep Royal Kay cherries refrigerated, for best flavor use within one week.

In California Royal Kay cherries are one of the earliest sweet cherries to come onto the market each spring.

The Royal Kay cherry was developed by Gary and Grant Zaiger and Leith Gardner at their experimental orchard in Stanislaus County, California near Modesto. Efforts to create the new cherry began in 1992 with a group of open pollinated stella cherry trees. From the grouping a third generation seedling known then as 13HA431 was selected. Picked for its early maturing nature and prolific, high quality fruit production the selected tree was then budded successfully asexually onto mahaleb rootstock. The fruit of this pairing would go on to be known as the Royal Kay cherry and was patented and introduced to the market in 2002.

Recipes that include Royal Kay Cherries. One