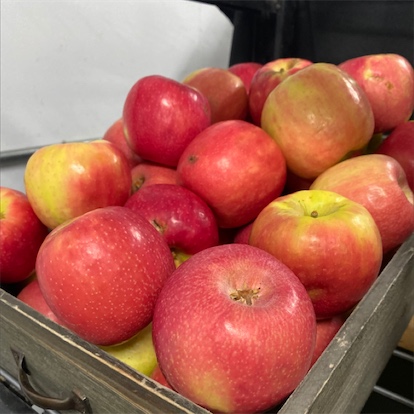 Cluster eggplants are small and round, about the size of a pea and one centimeter in diameter. These tiny fruits are arranged in clusters of ten to fifteen bunched together in a fashion similar to grapes and as the fruits ripen their thin skin will turn from light green to yellow. The fruits grow on shrubs that can reach up to sixteen feet in height. The stems and leaves of the Cluster eggplant are covered in fine hairs, and small hooked thorns and the flowers of the plant are most often white. Each fruit can contain up to two hundred tiny, flat, brown, and edible seeds. Cluster eggplants range in flavor from bitter to tart when raw, and their texture is exceptionally crunchy. Once cooked they will take on a soft quality and the bitter flavor is minimized.

Cluster eggplants are available year-round with peak season during the summer months.

Cluster eggplant, botanically classified as Solanum torvum, is a loose western term that is given to the fruit of a prickly shrub that grows wild and semi-cultivated. It is one of the only eggplants that are thought to have little relation to the common domesticated eggplant, Solanum melongena. Also known as Pea eggplant, Bunch eggplant, Pea aubergine, Wild eggplant, and Turkey berry, the Cluster eggplant is popularly used as rootstock for growing more traditional eggplants as a way of boosting the heartiness of the root system and decreasing its susceptibility to diseases. Cluster eggplants are vigorous growers and are often seen as an aggressive and problematic species in the Americas and Australia, and in 1983 it was added to the United States federal noxious weed list.

Cluster eggplants are an excellent source of iron, calcium, and manganese.

Cluster eggplants have increased in popularity in Thai cuisine and are often grown in home gardens across Thailand. This plant is valued not only for its fruit, but also for the nutritional and medicinal properties that are found in the fruit, leaves, and roots. In Thailand, the Cluster eggplant is known as Makhua Phuang and is commonly used in curries and chili pastes and is consumed raw, cooked, or dried.

Cluster eggplant is native to South America and Africa and is perhaps the closest relative to the wild eggplant ancestors of Africa. It was then naturalized in the South Pacific, Asia, and Australia and was first introduced to the United States as a potential food crop in 1899 and was naturalized in Florida by 1930. Today Cluster eggplant can be found at farmers markets and specialty grocers in Asia, North America, Central America, South America, the Caribbean, Africa, Indonesia, and Australia.

Recipes that include Cluster Eggplant. One