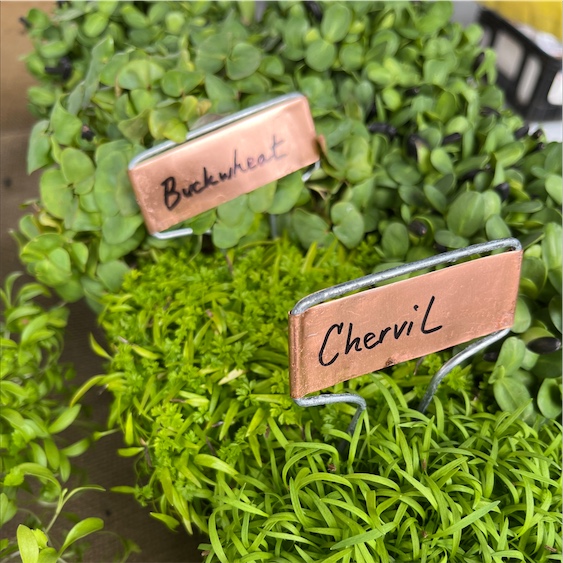 Cilantro is a soft leafy herb that is entirely edible. It grows 50 cm tall and produces petite whitish-pink flowers in clusters called umbels. The blossoms have a lacy decorative appearance with minimal aroma. On the palate they taste like a milder version of the Cilantro leaves. Lemony citrus notes are balanced by sweet spicy bite and finish with a subtle texture.

Cilantro flower is available in spring and summer.

Cilantro, commonly called Coriander or Chinese parsley, is botanically known as Coriandrum sativum. It is an herbaceous annual in the family Apiaceae. While the leaves and seeds are classically used in Asian, Indian and Latin cuisines, more European and American chefs are discovering the flowers for their subtle quality. Interestingly, Cilantro is adored by some yet despised by others. Chemists have found fat molecules called aldehydes present in the plant that are similar to those found in some lotions and soaps, giving credit to the claims of the herb’s “soapy” character.

Cilantro is an excellent source of vitamins A, C and K, as well as iron and manganese. It also contains antioxidants and chemicals with antibacterial properties.

Cilantro flowers should always be used fresh, never dried. The blossoms may be used alongside the leaves in most recipes or as a substitution for a milder flavor. They have a cooling effect on spicy dishes and lift richer flavors. Pair the flowers with ingredients such as avocado, carrots, zucchini, tomato, coconut milk, citrus, ginger, mint, lemongrass, chile peppers, yogurt, chicken, lamb and white fish.

Cilantro has been used to treat anxiety and insomnia in Iranian folk medicine.

Cilantro is native to Southwest Asia and North Africa. Today it is cultivated in herb gardens around the world, but prefers climates with cool dry summers. It thrives in well drained soils with full sun to partial afternoon shade. It is a quick growing herb that is prone to bolting, which is ideal for the harvesting of its flowers and seeds. For a ready supply of the young supple leaves, plantings should be staggered throughout the summer.