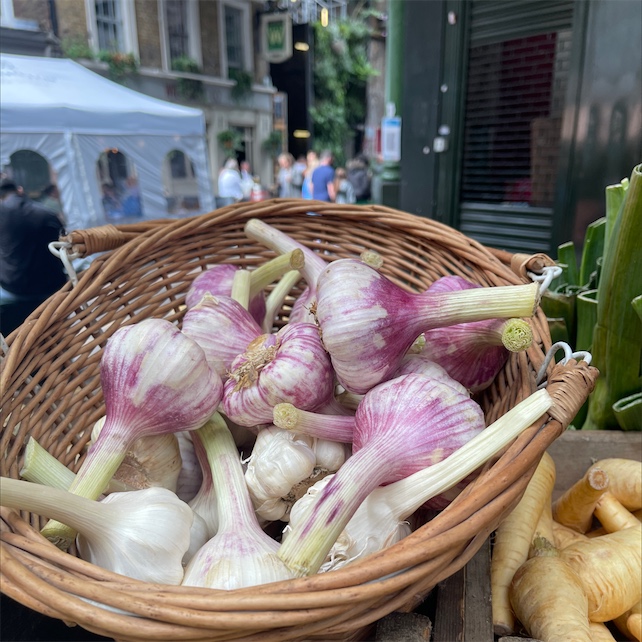 Green Pea shoots are small, averaging 5 to 15 centimeters in length, and consist of a thin stem bearing 2 to 4 leaves with developing tendrils. The green leaves are flat, oval, and flexible with even, curved edges. The first two leaves to emerge are known as cotyledons, and these leaves generally have a sweeter, more delicate flavor compared to the true leaves that later emerge. Many Green Pea shoots will contain both types of leaves, and the leaves connect into an elongated, pale green, crunchy, and slender stem. Green Pea shoots have a subtle, earthy aroma and are crisp and tender with a sweet, slightly nutty, and fresh, grassy flavor.

Green Pea shoots, botanically classified as Pisum sativum, are the young edible leaves and stems of pea plants belonging to the Fabaceae family. The herbaceous shoots are harvested approximately 2 to 4 weeks after sowing and are one of the earliest vegetables grown in gardens. Green Pea shoots can also be cultivated indoors year-round and are grown from many different varieties of garden peas, the two most common being sugar snap peas and snow peas. It is important to note that green pea sprouts and Green Pea shoots represent two different stages of pea greens. Green pea sprouts are typically grown in water, harvested after a few days of growth, and are consumed with the seed and root. Green Pea shoots are more mature than sprouts and are cultivated in soil, harvested after the true leaves have appeared, and are eaten with the stem, leaves, and sometimes developing tendril. Green Pea shoots were traditionally consumed in Asia and were not widely adopted into American cuisine until the late 20th century. In the modern-day, Green Pea shoots are highly favored for their crisp, tender texture and bright, sweet, and grassy flavor.

Green Pea shoots are an excellent source of fiber to stimulate the digestive tract and vitamin C to strengthen the immune system while reducing inflammation. The shoots are also a good source of iron to create the protein hemoglobin to help transport oxygen in the blood, folate to develop genetic material, and lower amounts of calcium, folic acid, and vitamins A and K.

Green Pea shoots have a delicate, crisp consistency that is best suited for fresh or lightly cooked applications such as stir-frying, sautéing, or steaming. The shoots can be tossed into green salads, dressed with vinegar, or used as a topping over pizza, layered into sandwiches, mixed into pasta, or blended into smoothies. Green Pea shoots can also be used as a fresh, edible garnish over main dishes, soups, and stews, cooked into omelets, combined with mashed potatoes and fried into a fritter, or lightly stir-fried and served with other bright vegetables. Green Pea shoots pair well with aromatics, including ginger and garlic, honey, almonds, radishes, water chestnuts, bamboo shoots, avocados, arugula, spinach, sesame, citrus, strawberries, balsamic vinegar, meats such as pork and poultry, fish, and shrimp. Pea shoots should be used within 1 to 2 days of purchase for the best quality and flavor, but the shoots will also last up to one week when stored unwashed, wrapped in a paper towel, and kept in an open plastic bag in the refrigerator.

The Hmong are largely credited with introducing Green Pea shoots into the American culinary scene in the late 20th century. The Asian ethnic group is native to Southwestern China, but during the 17th century, with rising limitations on their freedom, the group was forced to migrate out of China to areas of Southeast Asia, specifically Laos, Thailand, and Vietnam. As the Hmong settled into other regions of Asia, they began to incorporate available culinary ingredients into their cooking, adopting simple, clean, and home-grown meals. Peas are a common plant found in Hmong gardens, and all parts of the plant are used for culinary purposes. The shoots are consumed in salads as a tender ingredient, finished with a squeeze of fresh citrus, and as the vines mature, they are strategically pruned and utilized as stir-fry greens. Pea pods are also used as a vegetable, and the seeds are used for sowing next season’s plants. In the late 20th century, many Hmong tribe members traveled to the United States as refugees due to persecution after the Vietnam War and settled into the Pacific Northwest, where they continued to plant peas for their edible shoots, vines, pods, and seeds.

Wild peas are believed to be native to regions of Western Asia, North Africa, and the Eastern Mediterranean and have been growing wild for thousands of years. Peas are considered one of the oldest cultivated crops and were quickly spread across Asia and Europe through trade routes, arriving in China sometime during the 1st century BCE. Over time, new cultivars of peas were created from the wild varieties, developing many of the peas that are commonly grown in gardens in the present-day. In the 15th century, Green peas were introduced to the New World through explorers and were extensively planted throughout North America. Though Green peas have been cultivated worldwide for centuries, utilizing the plants for their young shoots was not often practiced. Green Pea shoots were traditionally incorporated into Asian cuisine, and eventually, the use of the tender greens permeated other cuisines throughout Europe and the United States in the late 20th century. Today Green Pea shoots are utilized in culinary applications worldwide, and the fresh shoots are found seasonally through farmer’s markets, Asian markets, specialty grocers, or in home gardens.

Recipes that include Organic Green Pea Shoots. One