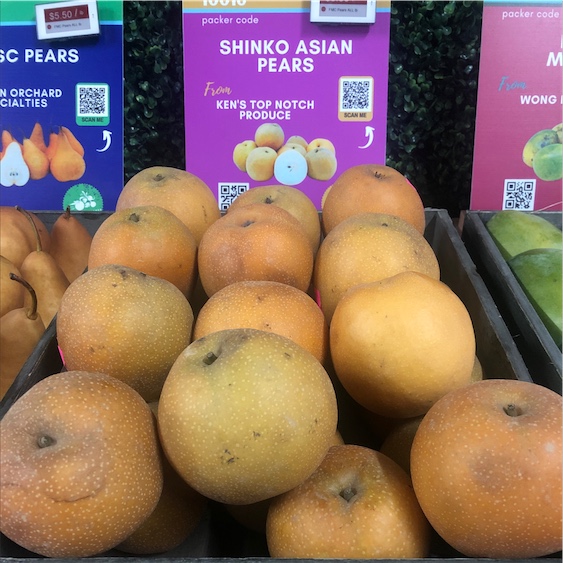 Tropical chayote has an elongated, oblong shape, averaging 10-20 centimeters in length, and has one larger, bulbous end that slightly tapers to a thinner, rounded end. The smooth, thin skin bears many deep indentations, folds, and wrinkles that span across the length of the squash and ranges in color from pale to dark green. Underneath the tough skin, the pale green flesh is firm, crisp, and juicy, encasing one small, edible white seed that has a subtle nutty flavor. Tropical chayote is crunchy and aqueous with a mild and slightly sweet, green flavor reminiscent of cucumber.

Tropical chayote, botanically classified as Sechium edule, is the fruit of a wide-spreading vine that can grow up to fifteen meters in length and is a member of the Cucurbitaceae or gourd family. Considered to a squash, chayote has been naturalized in tropical regions around the world and is known by many names including Sayote or Sayote in the Philippines, Labu Siam and Labu Jipang in Indonesia, Su Su in Vietnam, and Sayongte or Fak Maeo in Thailand. There are many different varieties of chayote that are labeled under the generic Tropical chayote name, and despite the various outward appearances, many of the varieties have a similar mild, green flavor. The entire chayote plant is edible, including the squash, flowers, vines, leaves, and roots, and Tropical chayote is a common ingredient in Asian cooking utilized to absorb accompanying flavors and add a crisp, fresh consistency into heavily spiced dishes.

Tropical chayote is best suited for both raw and cooked applications such as grilling, stir-frying, boiling, steaming, and baking. When young, the tender, crisp squash can be sliced or shredded into salads and slaws, chopped into salsa, or pickled for extended use. In Thailand, raw chayote is sometimes used as a substitute for green papaya in som tam, which is a sweet and sour salad that is considered to be the country’s national dish. As the squash matures, the skin is edible but is commonly removed as it bears a chewy, tough texture. Tropical chayote is often added to soups, stews, curries, and casseroles, or it is finely chopped and used as a filling for dumplings. It can also be stir-fried or sautéed with other vegetables for an added crunchy element or stuffed and baked similarly to a potato. Fully mature Tropical chayote can be boiled and mashed or slow-roasted as an accompaniment to fried fish and white rice. In addition to the fruit, the vines and leaves are also edible and are popularly stir-fried or mixed into salads and soups. The squash will keep 2-4 weeks when wrapped in a paper towel and stored in a plastic bag in the refrigerator.

Tropical chayote is a popular ingredient in Southeast Asian cuisine as it is readily found at local markets and can be utilized in a wide variety of applications as a secondary component. In Indonesia, the squash is cooked like a vegetable and is incorporated into labu siam tumis, which is sliced chayote cooked with chiles, spices, aromatics, coconut milk, and galangal to make a spicy dish served over white rice. The squash can also be used in sayur asem, which is a vegetable soup using a wide variety of ingredients such as cabbage, red beans, corn, jackfruit, or chayote and is cooked in a clear broth. In addition to finding the squashes stacked in large piles and sold inexpensively at fresh markets, Tropical chayote has become a common home garden plant that can grow across walls, fences, and gates. Many locals harvest the squashes from their gardens and use it to impart a fresh flavor and crisp texture to otherwise heavy dishes. One favorite home recipe in Indonesia utilizing Tropical chayote is known as gado-gado, which is a refreshing salad using ingredients such as bean sprouts, potatoes, carrots, green beans, and chayote tossed with a creamy peanut sauce.

Tropical chayote is a descendant of the original chayote varieties that were native to Mexico and Central America and were first cultivated during the Aztec Empire of pre-Columbian times. The squash was then spread across the world via European explorers and immigrants, primarily during the Columbian Exchange in the 15th and 16th centuries and became widely naturalized in the humid, tropical regions of Asia by the 18th and 19th centuries. As cultivation began in Asia, many new varieties were bred and selected for various traits and growth habits, but many are still labeled under the generic Tropical chayote name. Today Tropical chayote can be found growing wild and sold at local markets and specialty grocers in Asia, Southeast Asia, Australia, Africa, and Central and South America.