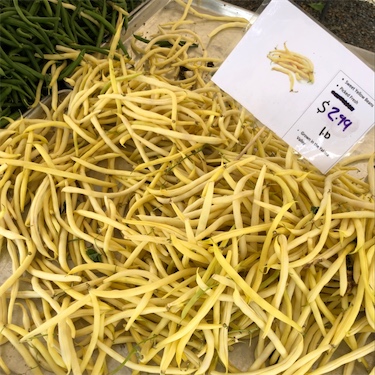 Star Apples are round and approximately two to four inches in diameter at maturity. Its skin is smooth, leathery and depending on variety either purple to red or yellow to green in color. The inner rind of the purple variety is dark purple and in green fruits white. This rind surrounds a soft, creamy, white pulp as well as six to eleven gelatinous seed cells. When the fruit is cut in half the gelatinous cells form a star shape, hence the name of the fruit. Some of the cells encase small, pointed, flat, black seeds. Fruits can contain anywhere between three and ten seeds, those with fewer seeds tend to have the best flavor. The pulp of the Star Apple is aromatic and has a tropical sweet flavor with nuances of apple, lychee and persimmon. Ripe Star Apples will be slightly wrinkled and dull in color with a soft give when squeezed. To fully ripen, keep at room temperature and once ripe store in the refrigerator.

Star Apples are available in the spring.

The Star Apple is of the family Sapotaceae and relative of the mamey sapote and the green sapote. They are known by a variety of different names such as golden-leaf tree, caimito maduraverde in Spain, caimite and caimitier in France and cainito and ajara in Portugal. There are two different varieties of Star Apples one with purple skin and one with green skin. Both varieties are tree ripened and unlike many tree fruits will not fall off the tree when mature so must be picked by hand when ripe.

Star Apples are prized for the soft sweet pulp they contain, which is most often enjoyed raw as is but can be used in a number of dessert and beverage preparations as well. Both the skin and rind of the fruit are bitter and inedible, to prepare slice in half and use a spoon to remove the pulp. Aside for a few medicinal purposes typically the seeds are not consumed. Best when served chilled the pulp of the fruit can be used in beverages, parfaits, sorbet and both green and fruit salads. Its flavor pairs well with mango, oranges, condensed milk, coconut milk and whipping cream.

The Star Apple was first documented by the Spanish explorer Cieza de Leon who discovered it growing in Peru in the 1500’s. Later it made its way to the Philippines, Panama, Guatemala, the Caribbean Islands, Zanzibar and the warmer parts of India. In the late 1800’s the United States Department of Agriculture acquired seeds from Jamaica and began growing the Star Apple first in Florida and then soon after in Hawaii. The Star Apple tree thrives in warm to hot tropical climates and is not very tolerant of cold and frost, particularly in young trees. Most commonly Star Apple trees are grown as home trees or in the wild and along roadsides. Commercial production is currently done on a small scale in southern Florida.

Recipes that include Star Apple. One