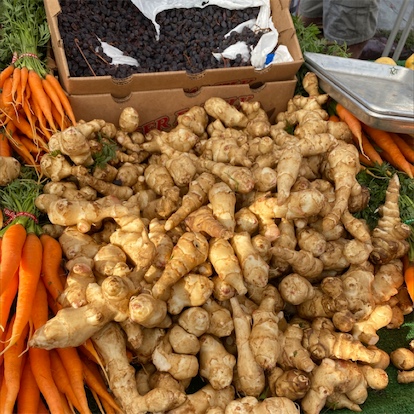 Red Zebra tomatoes have a unique striped bi-colored outer skin that is overall cherry-red in color with light yellow-orange streaks. They are round and uniform in shape, and they grow to be about two to three inches when matured. The inner flesh of the Red Zebra is darker red in color and is very juicy, offering a mild acidity and a delicious sweet-tart tomato flavor. Red Zebra tomato plants are indeterminate, meaning that they set fruit throughout the season along tall vines that needs to be staked, not only due to the plant’s large size, but also because of it’s high yields of the beautiful fruit.

Red Zebra tomatoes are available in the spring and early summer.

Red Zebra tomatoes are scientifically known as Solanum lycopersicum, formerly Lycopersicon esculentum. Red Zebra is a chance offspring of one of the first marketed “green when ripe” tomatoes, the green zebra, which was developed in 1980 by Tom Wagner. Red Zebra is also the parent variety of the created heirloom, red lightning, which boasts the same yellow streaks as its parent.

Red tomatoes like Red Zebra are widely known for their outstanding antioxidant content, notably their concentration of lycopene, which is responsible for their red pigmentation and has been linked in several studies to the prevention of certain types of cancer. Tomatoes are a good source of calcium and iron, and they also contain decent amounts of phosphorus, sulfur, and potassium. They are rich in vitamin C, and contain good amounts of vitamins A and B.

Red Zebra tomatoes are extremely flavorful and can be used for fresh eating, roasting, making sauces, or even canning. With their round uniform shape, Red Zebra tomatoes are perfect for skewering onto kebabs or serving halved in salads. Their vibrant color will showcase well in pico de gallo and bruschetta, or atop pizzas and pasta. Red Zebra tomatoes will complement aged cheeses, such as parmesan and asiago, as well as soft cheeses like mozzarella and queso fresco. They also pair well with avocado, mushrooms, eggplant, garlic, onion, poultry, aged balsamic vinegar, cream based-sauces, and herbs such as basil, oregano and cilantro. Simple preparations best allow for the Red Zebra’s intense flavor to shine. Try slicing and drizzling with olive oil, balsamic vinegar, and a touch of salt and pepper, or layer slices with basil and mozzarella for a caprese salad. Store Red Zebra tomatoes room temperature away from direct sunlight until ready to use, up to two or three days when ripe. Refrigerate only extra-ripe tomatoes you want to prevent from ripening any further.

After farmer Jeff Dawson found a red tomato growing among his green zebra tomatoes in California, he planted the unique tomato the following year and it actually produced four distinctive varieties that he would go on to name and market in America: a green tomato with no stripes called marz, a yellow and green striped tomato called lemonhead, a large striped red tomato called copia, and of course the round red and yellow striped tomato called Red Zebra.

The Red Zebra tomato was first discovered growing in California by Jeff Dawson in the 1990’s. Dawson found the red tomato growing in his patch of green zebra tomatoes, hence Red Zebra is believed to be a natural cross between a green zebra and an unknown parent. After growing and stabilizing over a few years, Red Zebra was first listed it in the 2003 Seed Savers Exchange Yearbook. Similar to other tomato varieties, the Red Zebra tomato plant is sensitive to freezing temperatures and prefers warm soil and full sun for optimum growing. Red Zebra has been said to grow well in most regions of the United States.

Recipes that include Red Zebra Tomatoes. One