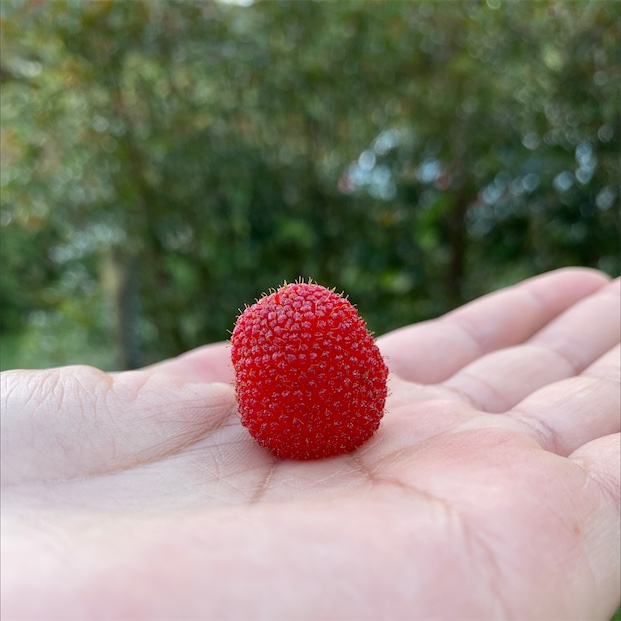 Red Belgian endive leaves fold tightly over one another to form a torpedo-like shape that comes to a slight point at its tip end. Growing to approximately six inches in length the tender white leaves of Red Belgian endive have red to burgundy edging and a slightly bitter flavor.

Red Belgian endive is available year-round with a peak season in the winter months.

Belgian endive and endive are both in the chicory genus. However Red Belgian endive, botanically known as part of Chichorium intybus is grown from chicory roots in a dark environment, while endive is botanically a part of Cichorium endiva and grown in the fields as a green, curly lettuce. Growers also refer to this second forced growth or bud as a chicon. In the marketplace Red Belgian endive can also be found sold under the name Red Witloof or French endive. When sold the heads are typically wrapped first in paper to prevent them from bruising or browning. The red coloring of this endive is a result of specific breeding and complementary gene pairing to control the anthocyanin and resulting presence and distribution of red color in the bud, a breeding method similar to that used in creating lettuces with red and purple coloring.

In the United States Belgian endive is commonly used fresh in recipes, in Europe however it is more commonly used in cooked preparations. It can be grilled, braised, sautéed or added to soups. When raw individual leaves can be stuffed and served as a canapé. Raw leaves can also be chopped and added to salads. Braising in butter will mellow the bitter flavor of Red Belgian endive. Its flavor marries well with pears, apple, cranberry, fresh herb such as thyme, sage and basil, cream or butter based dressings and sauces, toasted pecans, pork, manchengo and pecorino cheeses. The delicate leaves should be stored wrapped in paper in the refrigerator and used within a weeks time. Exposure to light will cause leaves to develop chlorophyll and change their desired white coloring to a pale green.

In its native France as well as in the Netherlands Red Belgian endive is a common vegetable served cooked during the winter and spring months. It is integral in classic French preparations such as braised endive and endive au gratin. In the United States however Red Belgian endive is sold as a gourmet vegetable and utilized mainly in salads or as part of a raw appetizer.

Belgian endive was discovered in the 1830's by a Belgium chicory farmer, who stored the roots in his cellar for drying to use as a coffee substitute. However, after spending several months away he returned to find the roots had sprouted small white leaves, which had a pleasantly bitter flavor and tender texture. In time this process would come to be called a “forced” second growth or “blanching”. This labor intensive growing technique involves growing the chicory from seeds, harvesting the roots then taking them indoors to grow again in a completely dark environment. Red Belgian endive specifically was created in 1976 when traditional witloof was crossed with the red Italian cultivator rosso di verona. Modern cultivators of Red Belgian endive have been bred specifically to produce heads that have uniform size and shape, tolerance to internal browning, resistance to bolting, reduced bitterness and improved coloring. France produces the bulk of Belgian endive supplying predominately European countries. In the United States, California is the only commercial producer of Belgian endive.

Recipes that include Red Belgian Endive. One