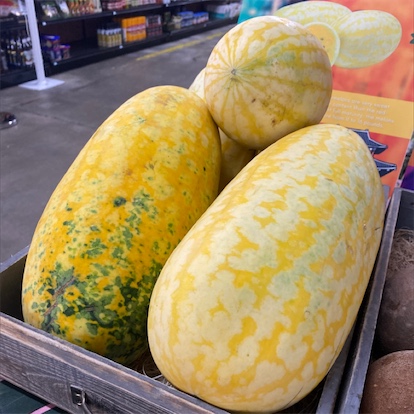 Common garlic bulbs range from medium to large, averaging anywhere between 5-8 centimeters in diameter, and consist of several cloves arranged in a number of layers depending on the variety. Each clove of garlic is encased in its individual wrapper, and the bulb itself has layers of thin, flakey wrappers to protect the cloves. Often referred to as the "stinking rose," whole Common garlic actually has a very mild allium scent and taste. However, Once the cloves are crushed or pressed, enzyme compounds are released, producing a sulfur-based molecule known as allicin, which is responsible for giving garlic its renowned pungent aroma and flavor.

Common garlic, botanically known as Allium Sativum, is the name dedicated to many softneck, artichoke varieties that are commonly found in commercial markets. Softneck varieties are favored as they are easy to grow, less particular about growing conditions, slower to bolt, and produce more cloves per bulb. In general, 98% of Common garlic found in the supermarket is one of two types, California Early and California Late. A unique feature of California Early is its ability to be used to make powders, seasonings, and salts. Both varieties are hardy and offer subtle differences for the commercial market to sell year-round.

Common garlic is rich in vitamin C, vitamin B6, and manganese. It also contains some calcium and phosphorus.

Common garlic can be consumed in both raw or cooked applications. Raw garlic tends to have a stronger flavor than cooked; and crushing, chopping, pressing or pureeing garlic releases even more of its oils providing a sharper, more assertive flavor than slicing or leaving it whole. Common garlic can be used in any dish that calls for garlic such as garlic chicken, spaghetti Bolognese, potato soup, to stews, but it also does especially well as the central flavor in marinades, dressings, sauces, and salts. Roasting garlic will enhance its flavor and add a subtle sweetness. Pair Common garlic with acidic fruits and vegetables such as tomatoes, tomatillos, and citrus, meats such as poultry, beef, pork and seafood, herbs like basil, thyme, and oregano, and other vegetables such as artichokes, snap peas, broccoli, asparagus, and Brussel sprouts. Common garlic will keep between one to four months, depending on the specific variety, when stored in a cool and dry place.

Garlic has long been used by a variety of cultures such as Greek, Italian, Chinese, Egyptian and European for its culinary, medicinal, and spiritual properties. There are many recorded myths, legends, and medicinal notes with garlic as the star. Garlic was found in the tomb of King Tutankhamen, and it was recorded that it was consumed by the slaves that built Khufu's pyramid at Gizeh. In the Jewish Talmud, it is suggested that couples eat garlic on the Sabbath so that they can know one another better, a nod to garlic's historical relevance as an aphrodisiac.

Common garlic is mainly produced in Gilroy, California, which is known as the commercial garlic capital of the world. Some Common garlic may also be imported from China, as China is one of the top producers and exporters of garlic. The type of Common garlic found in supermarkets largely depends on the commercial company and the supplier they choose to purchase the garlic from. Today, Common garlic is widely available in markets and stores across the United States.

Restaurants currently purchasing this product as an ingredient for their menu. the other 38...

Recipes that include Garlic. One

People have shared Garlic using the Specialty Produce app for iPhone and Android.